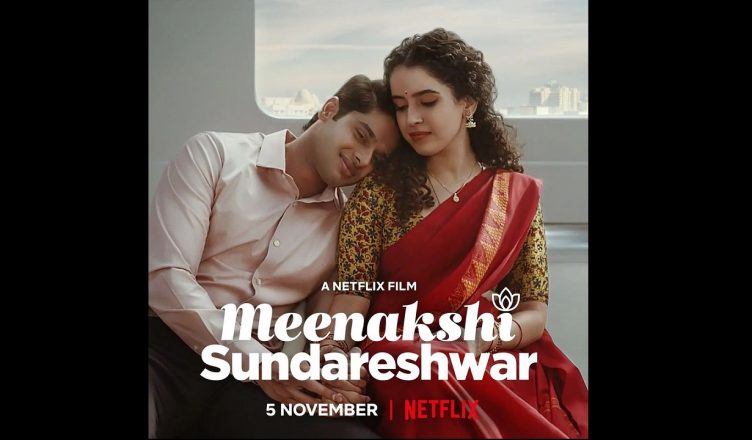 The story of the movie: Sundar (Abhimanyu Dassani) has completed his engineering since a year but is unable to find a decent job. He has no interest in his father’s saree business and hence has become the black sheep of the family. Under pressure from his parents, he agrees to an arranged marriage. In a hilarious goof-up, Sundar’s family accidentally land up at the doorstep of Meenakshi (Sanya Malhotra) though they were supposed to meet some other family a few blocks away. However, Sundar and Meenakshi bond very well. Also, Meenakshi’s grandfather (Shivkumar Subramaniam) remarks that this blunder could be a sign of God. Moreover, their names are also that of Lord Shiv and Goddess Parvati. So they get married. On the wedding night, Sundar gets a message that he’s been selected as a trainee in a reputed company in Bengaluru, Syspace Technologies. He leaves for Electronic City the next morning. On the first day of work, his boss Senthil (Sukesh Arora) tells the employees that he wants to hire only bachelors. Sundar decides to hide his marital status in the office as he doesn’t want to lose out on the opportunity. Meenakshi, meanwhile, is supposed to join Sundar in Bengaluru. But Sundar now refuses Meenakshi to live with him in Bengaluru as it can damage his career prospects, lest someone finds out that he’s already hitched.

Meenakshi Sundareshwar has a lovely beginning, explaining the significance of the title and its connection with the renowned temple in Madurai. The scene where Sundar accidentally steps into the house of Meenakshi for marriage purposes reminds one of an exact scene in Mitron. However, one lets it pass as it’s treated nicely. The film gets a bit into the silly zone in the scene where Sundar and Meenakshi fail to consummate their marriage. The eccentricity of Senthil, especially the part where he goes for a haircut in front of the staff, doesn’t raise laughs. The film gets better when Sundar and Meenakshi try to be in touch despite the long distance and do cute things for one another. The interval point, where the couple get caught while doing role-play, is hilarious. Post-interval, the film again falls as they face troubles. The track of Ananthan (Varun Shashi Rao) and that of Rukmani Attai (Nivedita Bhargava) doesn’t reach a logical conclusion. The finale is sweet but one can guess it from a mile’s distance.

Sanya Malhotra is credited before Abhimanyu and is the best actor in the film. She plays her part with sensitivity and also to the gallery in certain scenes. Abhimanyu Dassani is decent although he has done better in his debut film, Mard Ko Dard Nahi Hota. Purnendu Bhattacharya (Mani; Sundar’s father) is good as the strict father. He has a strong resemblance to that of Suresh Oberoi. Nivedita Bhargava has a strong presence but is wasted. Varun Shashi Rao is likeable. Sukesh Arora is fine as the weird boss. Shivkumar Subramaniam is memorable in a cameo. Manoj Mani Mathew (Vaman; Sundar’s brother) is too good. Kalp Shah (Rasu; Sundar’s nephew) raises laughs especially how he preempts what the next person is going to say. Ritika Atul Shrotri (Mukai; Sundar’s sister) is fair. Chetan Sharma (Sai Kumar), Khuman Nongyai (Diganta) and Danish Sood (PVR) are okay as Sundar’s colleagues. Komal Chhabriya (Suhasini; Sundar’s mother), Archana Iyer (Poojitha; Sundar’s bhabhi) and Saurabh Sharma (Tutor) don’t get much scope.

Vivek Soni‘s direction is decent and technically, he handles the film very well. A few scenes are exceptionally handled and it’s sure to make viewers smile. But while the viewers would relate with the couple in their lovey-dovey moments, one fails to connect with them when their relationship gets strained. This is because the goings-on in the second half is not convincing. It also reminds one of the films like Saathiya and Chalte Chalte. Had Vivek Soni handled the post-interval part with panache, it would have probably made for a fine love story.

On the whole, Meenakshi Sundareshwar is technically first-rate and rests on a fine performance by Sanya Malhotra. But the clichéd and silly developments, more so in the second half, prevents the film from overall impressing audiences.