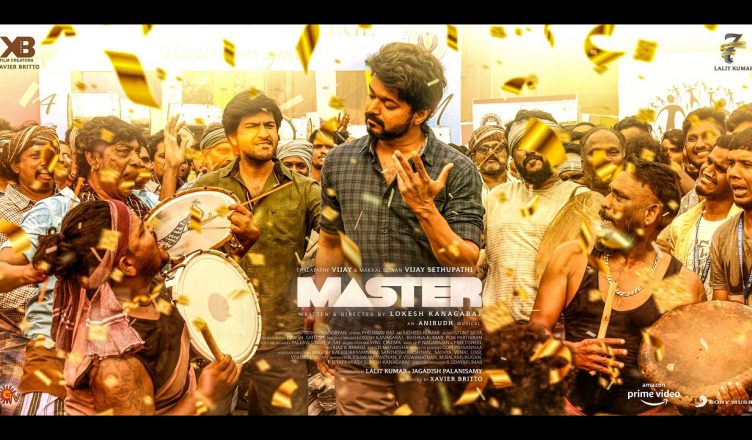 A lot of people and even industry insiders had predicted that it’ll take a couple of years or at least till the end of 2021 for cinema business to revive and go back to old levels. They even cited the non-performances of small-budget and not-so-exciting films to prove their point. But the advance booking of the Tamil film Master silenced them all. Starring Thalapathy Vijay, the film releases today and the craze is such that most of its shows have got full even in non-Tamil markets! In Chennai, the tickets sales have been historic! The only fear was that – what if the film turns out to be a poor fare and what if the film drops after the initial euphoria? Thankfully, that won’t happen. Master is a rocking film from start to finish and is all set to be the FIRST BLOCKBUSTER OF THE PANDEMIC ERA!

The story of the movie: JD (Thalapathy Vijay) is a professor at a college in Chennai and is extremely popular with the students. The management hates him because he’s sloshed most of the time and also due to his unconventional ways of teaching and also because they believe he takes decisions that might go against the spirit of their institution. One such instance is when the staff decides to not hold college elections. But JD is the only one who vetoes this decision. The principal agrees to hold the election on the condition that if it leads to violence, JD will resign. JD agrees and signs on a piece of paper. The elections are held with a lot of excitement but also in a non-violent manner. However, when one of the candidates, Bhargav (Shanthanu Bhagyaraj) loses to a female student, Savitha, all hell breaks loose. As per his promise, JD resigns. He’s assigned a new task – of becoming the new master of a reformatory institution for juvenile delinquents. JD decides to relax and not bring any change at this centre. He just wants to finish his three-month assignment here and leave. However, he realizes that a lot of things are wrong at this remand home. The children are compelled to consume drugs and alcohol all day at the instruction of a man named Bhavani (Vijay Sethupathi). The kids are also asked to confess to a crime committed by Bhavani’s adult men since the authorities can’t really give strict punishment to minors.

Master is a complete mass film from the very start. The film begins showing how Bhavani became so dangerous. The journey of the teenaged Bhavani is very exciting but the entry of adult Bhavani is terrific. The film gets better as JD enters the narrative. The action scene during his entry is sure to create frenzy among the audiences. The excitement continues even in the later scenes. The best of the first half is reserved for the 15 minutes just before the interval. As for the intermission point, it is as massy as it gets! The second half starts with a bang but in the middle, it drops. It’s not like the film drags. The goings-on are still interesting but you wish things were as massier as they were in the first half. Thankfully, in the last 30-35 minutes, the film picks up yet again with the finale being just out of the world.

Speaking of performances, Master belongs to both the Vijay’s! Thalapathy Vijay, as expected, rocks the show. He gives a complete ‘paisa-vasool’ performance and adds the mass element of the script. His comic timing too is spot-on. Vijay Sethupathi is flawless and just apt for the part. What’s interesting is that his character has a complete arc and a lot has been invested in shaping it well. Also, he looks ferocious and hence, it’s convincing. Malavika Mohanan (Chaurlata) lends able support. One wishes she had at least some contribution in the finale. Andrea Jeremiah is nothing special. Arjun Das (Das Anna) is too good and dominates some important scenes of the second half. Nassar is fair in the cameo. Shanthanu Bhagyaraj is decent. His characterization was weak and one wishes a little more time was spent on him. The actors playing Savitha, Sabari and Manikandan (the kids who write the letter to JD), Undiyal and the principal are fine.

Anirudh‘s music is of the chartbuster variety. ‘Vaathi Raid’ is like the theme of the film and is quite massy. Next comes ‘Vaathi Coming’. ‘Kutti Story’ is light-hearted but fun. ‘Beat of Master (Instrumental)’ is played at a great point. ‘Pona Pogattum’ is relegated to the background. ‘Polakatum Para Para’ is memorable especially due to Vijay Sethupathi’s dance. Anirudh’s background score is one of the highpoints. The impact in several scenes is enhanced due to the background music. Dinesh and Sathish‘s choreography is highly entertaining.

Sathyan Sooryan‘s cinematography has the commercial feel. Sathees Kumar‘s art direction is appealing and gritty in the remand home scenes. Stunt Silva‘s action gets a bit gory but it’s as per the requirement. Pallavi Singh and V Sai‘s costumes are glamorous and also straight out of life. No characters are needlessly wearing flashy clothes and yet look appealing. Unifi Media‘s VFX is fine. Philomin Raj‘s editing is razor sharp.

Lokesh Kangaraj‘s story is simple and ordinary. But Lokesh Kangaraj‘s screenplay is superb and ensures one doesn’t feel like watching a plot beaten to death several times. Also, the college and remand home element adds to it’s novelty. Lokesh Kangaraj, Rathna Kumar and Pon Parthiban‘s dialogues are sharp and sure to induce claps and hoots.

Lokesh Kangaraj’s direction is supreme. It’s great to see how he uses several strategies, long abandoned by some in Bollywood, successfully. The film is primarily about juvenile delinquents. But Lokesh invests the first hour by establishing and focusing on the college setting. In today’s times of so-called ‘realism cinema’ and supposedly ‘shorter-the-film-the-better’ era, most filmmakers would have avoided the college track or reduced it drastically. Lokesh Kangaraj doesn’t do so. He takes his own sweet time. The entry track of Thalapathy Vijay in fact goes on for almost 15-20 minutes! But he makes sure he doesn’t bore the audience or make them restless. Yet, one doesn’t mind its 178 minutes of run time. Secondly, the film also makes a nice social comment on underage crime and it’s very well woven with the principal narrative. One just wishes the second half didn’t drop and was as interesting. Nevertheless, Lokesh rocks the show!

Some of the best scenes:
1. The growing up scenes of Bhavani
2. Bhavani’s entry
3. JD’s action scene in the bus and metro
4. JD brought to college
5. The college election scene
6. JD reaches juvenile home
7. 15-20 minutes before interval
8. JD gets a makeover and gets strict
9. JD unknowingly holds Bhavani hostage (hilarious)
10. The kabaddi sequence
11. The last 20-25 minutes

On the whole, Master is a complete mass entertainer and the need of the hour. The performances of Thalapathy Vijay and Vijay Sethupathi, the exciting music score, action, social message and the overall commercial vibe makes it a paisa vasool fare. The film has taken a historic opening in the pandemic and has created frenzy, shocking all those naysayers who predicted that ‘the era of going to cinema halls is over’! If you are craving for a complete masala film and are dying to whistle and clap in cinemas, then do yourself a favour: pick up a show that has English subtitles and go for Master. Or watch the Hindi version. But don’t miss it for anything!