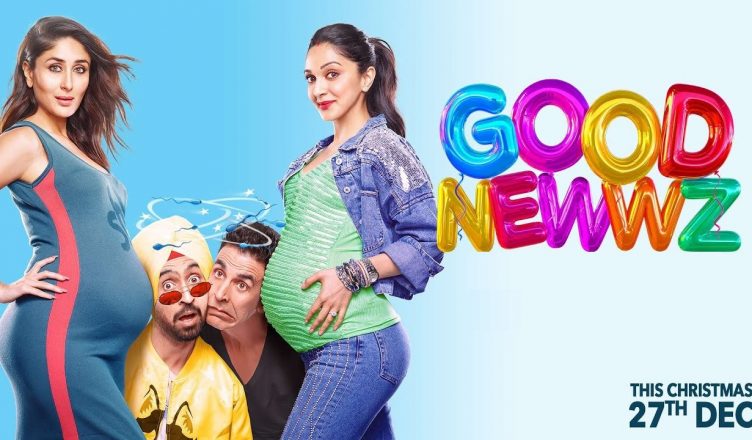 If there’s one superstar who is bringing new to the table with every film and yet manages to excite audiences, it’s none other than Akshay Kumar. This year, he was seen in 3 diverse films – the period actioner Kesari, the space drama Mission Mangal and the comic caper Housefull 4. And now, he is all set to appear in another comedy film, but with a difference – Good Newwz. The trailers looked excellent and as expected, Good Newwz fulfills all expectations!

The story of the movie: Mumbai-based Varun Batra (Akshay Kumar) is married to Deepti Bhatia aka Deepu (Kareena Kapoor) since seven years. While Varun works in a high position in a car showroom, Deepu is a journalist. They have been trying to conceive a baby since a long time but their efforts prove futile. They go to Delhi on Lohri to meet Varun’s sister Richa (Anjana Sukhani) who suggests them to try for in vitro fertilization (IVF). She also suggests that they meet Dr Joshi (Adil Hussain), a successful expert in this field in Mumbai. Once back in Mumbai, they speak to Dr Joshi and give their go-ahead. Coincidentally, at the same time, Honey Batra (Diljit Dosanjh) and Monika Batra (Kiara Advani) also give their samples to Dr Joshi. Since their surnames are similar, a goof up occurs. Varun’s sample is planted in Monika’s body while Honey’s sample is planted in Deepu’s body!

Good Newwz begins in a very Hollywood style, especially the way the cast and crew is mentioned against the Mumbai skyline. In no time, the characters of Varun and Deepu are introduced and also that their mission is to conceive. Hence, it grips you from the very start. The scenes of them trying to understand the IVF process and finally participating in it make for a hilarious watch. The entry of the other Batra couple – Honey and Monika – is a bit late but once they arrive, the fun enhances. The intermission point is very smartly done. Post interval, the humour continues but it also gives place to some lovely emotional and dramatic moments. The last 20-25 minutes of the film are very touching and the film ends on a good note.

Good Newwz rests on the power packed performance of all the four main actors. Akshay Kumar easily takes the cake as his character leaves the maximum impact. Varun Batra is a complex guy who’s got into a dilemma thanks to the mix up. Akshay however brings out this aspect beautifully. Also, it’s heartening to see that he breaks the conventional macho rules when his character expresses his inability to have sex multiple times to Deepu. Kareena Kapoor looks like a million bucks. Performance wise, she is first rate. Her comic timing is spot on but she shines the most in her dramatic sequence in the second half. Diljit Dosanjh arrives late in the film but once he does, he takes the film to another level. He gets into the skin of his character and is very convincing. Kiara Advani doesn’t have much to do in the first half. But post interval, she leaves a huge mark. Her character doesn’t overtly express, unlike her hubby, and once viewers understand it well, one can’t help but praise Kiara even more for playing the part to the T. Adil Hussain has his moments. Tisca Chopra (Dr Joshi’s wife) is quite good. Anjana Sukhani and the actor playing her husband are dependable. The actors playing Varun’s parents get no scope. Mohit Raina is dashing in the cameo.

Music is in sync with the film. ‘Sauda Khara Khara’ is exhilarating and used well. ‘Chandigarh Mein’ is played in the end credits and is fine. ‘Laal Ghagra’ is peppy while ‘Dil Na Jaaneya’ is touching. There’s also a gym song featuring Diljit and Kiara. It seems forced but since it’s conceptualized well, viewers won’t have complaints. John Stewart Eduri‘s background score is a bit loud but it works well.

Vishnu Rao‘s cinematography is awesome. The locales of Mumbai especially are well captured. Shashank Tere‘s production design is inauthentic and takes away the realism. Aki Narula and Priyanka Mundada‘s costumes are glamorous. Especially the clothes worn by Kareena are beautiful. Redefine‘s VFX is a bit unrealistic but in the scene where Kareena imagines that she gave birth to baby Diljit is flawless. Manish More‘s editing is sans complaints.

Jyoti Kapoor‘s story is novel and brilliant. The characters and their lifestyle are well depicted and there’s also a good dose of comedy and drama. Jyoti Kapoor‘s screenplay (additional screenplay by Rishabh Sharma) is very neat and highly entertaining. They ensure that the audiences don’t get confused and that they understand the entire process of IVF. A few moments in the second half however seem a bit unconvincing, especially the way the characters start fighting after bonding very well and vice versa. Also, a few scenes might make one feel that the film is anti-abortion and anti-adoption. But these are minor glitches in an otherwise we’ll written script. Jyoti Kapoor, Rishabh Sharma and Raj Mehta‘s dialogues add to the drama and confrontation and hence, also add to the impact.

Raj Mehta‘s direction is terrific, especially considering that it’s his directorial debut. The film is 133 minutes long and keeps one captivated as there’s so much happening every minute. A few scenes in the first half might however seem too bold for audiences, particularly when the characters are talking about their sex life. However, Raj Mehta has ensured that the film has a mainstream appeal. The manner in which Varun and Deepu are repulsed by Honey is very relatable. The same goes for the scene where Deepu and Monika bond over pregnancy and pani puri. In some scenes, the switching of the mood from humorous to confrontational is a bit sudden. But in places, it works well, especially in the finale.

On the whole, Good Newwz is a bit bold in the first half but overall, it is a well-made and well-written mainstream entertainer that ‘delivers’ what it promises. The performances by all four are terrific, especially Akshay Kumar who once again proves he’s one of the finest actors of our times. It’s the final film of 2019 and viewers should definitely not miss it at any costs. Recommended!