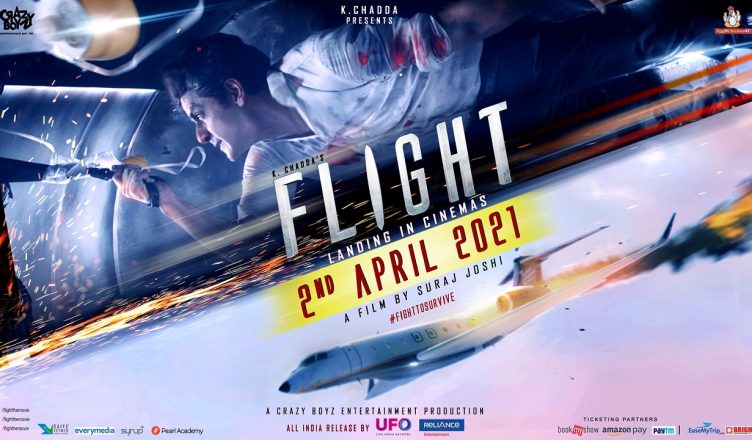 The survival dramas are difficult to pull off but if done well, it can make for a highly thrilling and satisfying cinema. Hollywood has given many memorable films in this regard like Cast Away, 127 Hours, Gravity, The Martian, etc. In Bollywood, Rajkummar Rao’s acclaimed 2017 film Trapped is the only film that comes to mind. Now, another film is all set to join this flick – Flight. The basic idea of this film itself is intriguing – a lone man trapped in an airplane that’s flying without a pilot at 30,000 feet! Thankfully, the execution and script makes it a watchable fare and fulfills expectations raised by the film’s trailer.

The story of the movie: A commercial flight flying from Mumbai to Bangkok crashes, leading to the loss of many lives. Mysteriously, the black box, which would have all the answers about the accident, disappears. All fingers are pointed towards Adityaraj Aviation, the company that designed the aeroplane. The management decides to release a statement that there is no error on their part. However, the company’s MD, Ranveer Malhotra (Mohit Chadda) locates the black box from the warehouse of Adityaraj Aviation. The details captured in the black box makes it clear that a faulty part in the vehicle resulted in the crash. Ranveer decides to bring out the truth to the public and also replace the faulty parts in other aeroplanes, much to the annoyance of the management. Only Balraj Singh (Pavan Raj Malhotra) supports Ranveer. He was the servant of Ranveer’s father, who established Adityaraj Aviation, and is now Ranveer’s constant support and guardian. Ranveer then proceeds to go to Dubai to meet the investors to discuss the crash. He decides to fly in the company’s private jet, Phoenix, which was designed by Ranveer’s father. Ranveer boards the flight and soon goes off to sleep. When he wakes up, he realizes that he’s the only one inside. The two airhostesses are shot dead. The cockpit door is locked and he’s not sure whether the pilots are still inside or whether they have also escaped. Ranveer assumes that the pilots have hijacked him and he tries to speak to them. But they don’t answer at all. What happens next forms the rest of the film.

Flight doesn’t waste time and begins with the plane crash sequence. The meeting scene makes it clear that the film is simple and that the tone is slightly over the top. Ranveer’s entry is heroic and the action scenes bring in some thrill before the mid-air drama begins. The conversation between Ranveer and Balraj, before the former takes the flight, gets a bit dragging. Obviously, the film goes on another level once Ranveer wakes up mid-air and realizes he’s trapped. The way he tries to take control of the situation and manoeuvres his way out keeps the interest going. The interval point is dramatic. Post-interval, the focus shifts to Balraj as well as he attempts to save Ranveer. A few developments here are difficult to digest, even if one keeps in mind that some cinematic liberties are going to be there in a film like this. The climax is nail-biting.

Speaking of performances, Mohit Chadda is terrific in the lead role. He plays to the gallery and suits the part well. His dialogue delivery and the typical hero-style slow walk is just right and that makes him apt for the role. He even scores in the action (he is credited for action design). In fact, it’s a surprise that this actor has done such few films in his life. Here’s hoping Flight helps take off his acting career significantly. Pavan Raj Malhotra is as always dependable. Shibani Bedi (Rukhsana) is decent and raises laughs. Ishita Sharma (Ishita) is lovely in the lone scene. Viveck Vaswani (Nathani), Zakir Hussain (Raman Khanna) and Farid Currim (Farid) are okay. Pritam Singh (Pilot Sanyal) is fine in a cameo.

Flight is a songless film and that really is a good decision. Smriti Minocha’s background score has a commercial feel. Deepak Pandey‘s cinematography is spectacular. Most of the film is set in a private jet and despite the limitation of space, the lensman manages to get some great shots. Amit Pathania‘s production design is realistic and detailed. One can see that a lot of research has gone into making the film and in designing the aircraft. Shaahid Amir‘s costumes are appealing. Nishant Khan‘s action (introduction action scene by Pradit Kumar) is innovative and adds to the fun. And thankfully, it’s not gory. Crazy Boyz VFX‘s VFX is one of the highpoints of the film. This is a CGI heavy film and it’s done very neatly. The film overall looks very rich. Rahul Mathur‘s editing is slick but drags at some points in the film, especially in the first half.

Suraj Joshi‘s direction is supreme. He puts in great effort in ensuring that audiences get to see something unique yet something which is massy. He keeps his storytelling very simple and that works big time as it gives the film a wide reach. On the flipside, the impact of a few scenes is diluted due to cinematic liberties and dialogues which are quite over the top. To see Ranveer being funny and sarcastic even when he’s in a near-death experience can seem superficial. Moreover, the very final few minutes in the film do surprise but it also raises a lot of questions.

On the whole, Flight is a surprise of the year. The trailer caught our attention and raised our hopes and thankfully, the film meets most expectations. The narrative is thrilling, massy and easy to understand and the performance by Mohit Chadda adds to the fun and madness. The VFX is topnotch and something to watch out for. Here’s hoping that this genuinely well-made film get it’s due. Here’s also hoping that the audiences enjoy this film on the BIG screen, as it’s sure to give them a uniquely entertaining experience!