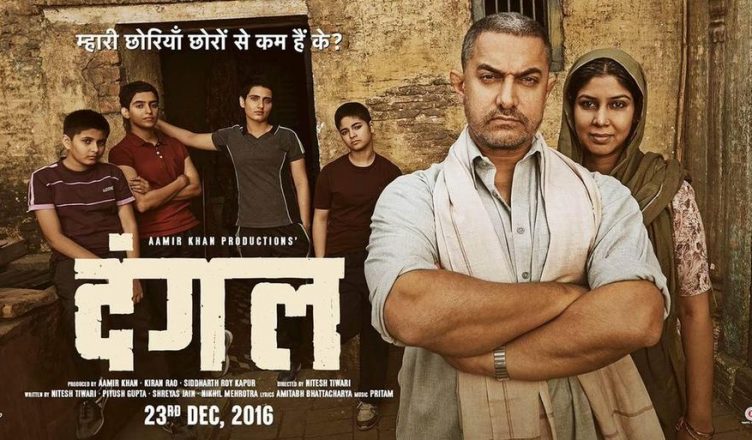 Haryana is among the worst five states in the country when it comes to sex ratio. Instances of child marriage, female infanticide are still high in this region. At a place where women are considered a ‘bojh’, imagine the plight of a man who has 4 daughters. And this man was yearning for a male child so that his son can achieve what he couldn’t. Dangal begins on such a note but then it takes a turn. It shows how the father realizes that his daughters are also as capable as any guy. From here on, it turns out to be an inspirational journey with dollops of entertainment. With Aamir Khan featuring as the lead actor, it was obvious that this film is bound to entertain. And that’s what it does. Dangal turns out to be one of the greatest films of the year!

The story of the movie: Mahavir Singh Phogat (Aamir Khan) is a pro wrestler who manages to excel at the national level. But medals don’t bring food on the table, argues his father. Mahavir hence quits wrestling. After his marriage to Daya (Sakshi Tanwar), he expresses his desire to have a son whom he can train and make him win Gold in wrestling. Sadly for him, he gets four daughters. One day when a parent comes up with a complaint, he realizes that his elder daughters Geeta and Babita are quite capable and can wrestle. Thus begins the difficult but life-altering training period of the daughters.

Like any other Aamir Khan film, Dangal is quite lengthy but not boring even for a moment. It grips the viewers very well from the first scene itself. The wrestling sequence in the beginning is highly impressive and sets the mood. The narration by Aparshakti Khurrana is also quite nice and it keeps the seriousness in check. In fact, it adds humour to the otherwise somber proceedings. Of course, the film turns better when the training session begins. It is highly engaging and at places, also very moving. But the balancing is done very well – nowhere will viewers hate Mahavir. His reasons for making his daughters slog are well justified. The film takes a turn in the intermission point, which is quite unexpected. Post-intermission, the fun continues although in some scenes, the film drops, which is needed. But the dramatic moments take the film on another level. And the pre-climax and climax are just outstanding!

The big question that is on everyone’s mind is – Is Dangal similar to Sultan? Honestly, at few places, one does think of Sultan. But Sultan merely introduceed viewers to the world of wrestling. Dangal goes deep into it. It explains the numerous rules of the game which was not shown at all in Sultan. And hence it’s great that Sultan arrived before Dangal since with Sultan, viewers got the basic idea about wrestling but with Dangal, they are now ready for its finer nuances. At the same time however, Sultan showed so many fights while the number of fights in Dangal are limited. One wished that Dangal was slightly longer and that it should have shown more adventures of Geeta and Babita. Moreover, the character of Babita gets a raw deal as Geeta gets more prominence somehow.

When it comes to performances, it’s obvious that it is Aamir Khan who takes the cake. His way of preparing for his characters is legendary and even in Dangal, he has left no stone unturned. He completely looks like a person from a Haryana village. And not just that, he plays an older character and even with regards to that, he’s quite nice. It is difficult to say if this is best work because in most of his films, he does something that leaves viewers amazed. Dangal is no exception! Fatima Sana Shaikh leaves a huge mark and makes a confident debut. Her characters go through a shift and she portrays it very well. And both she and Sanya Malhotra look completely authentic when they are wrestling. Sanya Malhotra too does very well although one wishes that she had more screen presence. Fatima and Sanya’s performances are also successful because the respective child actors did very well – Zaira Wasim and Suhani Bhatnagar. Both do exceptionally well and dominate the first half along with Aamir. Sakshi Tanwar is fine in a supporting role. It’s good to know that she’s not limiting herself to TV and is trying for films. She deserves more film roles. Aparshakti Khurrana (Omkar) is quite terrific. His narration is also quite interesting. Again, special mention should go to the actor playing his young self. Girish Kulkarni (coach Pramod Kadam) is the surprise of the film. Watch out!

Pritam Chakraborty’s music is fine and blends well with the narrative. The title song is the best followed by Haanikaarak Bapu. Naina stands out but is quite touching. Dhaakad and Idiot Banna are foot-tapping while Gilehriyaan again is an unexpected number but used well. Background score is great. Setu’s cinematography is award-worthy. The wrestling scenes are well shot but even in the rest of the scenes, he has done a commendable job. Laxmi Keluskar and Sandeep Meher’s production design gives the film a very realistic feel. Kripashankar Patel Bishnoi deserves the highest praise for he’s the one who coached Aamir and the girls and also choreographed the wrestling scenes. Sham Kaushal’s action also aids Kripashankar’s work nicely. Shajith Koyeri’s sound design is superb – notice how even the noise of the mat is also incorporated. Nitesh Tiwari, Shreyas Jain, Piyush Gupta and Nikhil Mehrotra’s story is brilliant. Even the fictional bit at some places, especially the climax, is very well done. Screenplay is gripping and top-notch. However, the character of Babita is not fully utilized due to which the viewers might feel a bit shortchanged. Nitesh Tiwari’s direction is simple and highly effective. He has always been a great director and with Dangal, he’s going to go in a different league!

On the whole, Dangal ensures that our year ends on a high! It is surely one of the finest films not just of 2016 but also one of the finest films of recent years. It is highly gripping and entertaining and not even for a moment does it seems dragging or boring. Aamir Khan as always rocks the show but the girls are not left far behind. It is drastically different from Sultan and hence, there won’t be any comparisons. Most importantly, it gives an important message and that too in an entertaining manner. Needless to say, this is a film viewers should not miss at any cost!