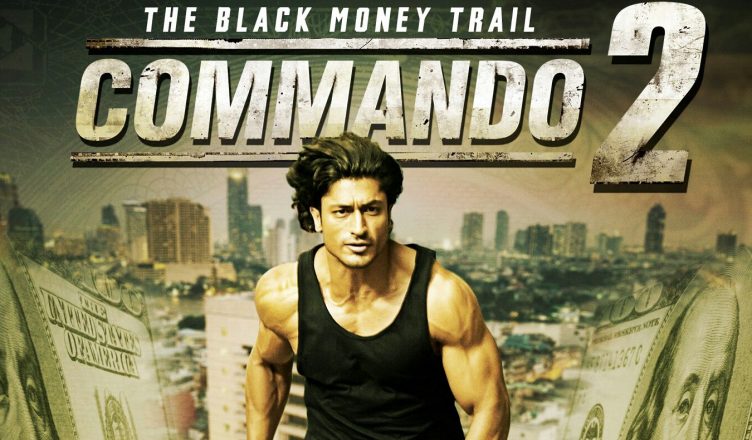 One of the burning issues of our country is black money. It is believed that billions of rupees have been stashed abroad. While demonetization announced on November 8 was an attempt to bring into the economy the black money present in the country, Commando 2 gives an idea how the black money stashed overseas can be brought back. The idea is great and it got a boost thanks to demonetization which is still one of the hot topics. What’s great is that the film has some great characters and has a superb story to tell. The flipside: It’s not told well! Commando 2 hence turns out to be an average flick!

The story of the movie: Karan (Vidyut Jammwal) is a top commando who is inducted into the special cell. Thanks to his interrogation, it is revealed that Vicky Chadda (Vansh Bhardwaj), who is responsible for laundering the black money, is in Malaysia. He gets arrested along with his wife Maria (Esha Gupta) and is transferred to a safe house. Karan along with Bakhtawar (Freddy Daruwala), Bhavna Reddy (Adah Sharma) and computer expert Zafar (Sumit Gulati) are given the responsibility of getting Vicky safely back to India. However, once they land in Malaysia and meet Vicky and Maria, they realize that things are not as simple as they seem. Moreover, Karan and Bakhtawar both have hidden agendas that can put their mission in jeopardy.

Commando 2 doesn’t have a great start – a montage in the beginning talks highly of demonetization, immediately making it seem like a pro-government film. Karan’s entry as expected is action-packed and the said sequence ends very well. From here on, the film turns out to be a fast-paced, interesting fare full of action, drama and intrigue. The manner in which Karan’s team is introduced and their adventures in Malaysia’s safe house make for a fine watch. The intermission point is a shocker – nobody can predict that coming. Post-interval however, Commando 2 goes the same way as producer Vipul Shah’s earlier film Force 2 – it goes into an unbelievable space. Things become too convenient. What’s more, like Force 2, it also has a scene shot like a first-person shooter game towards the finale but it’s not as well executed as in Force 2. Also, there are far too many twists and turns and double crossings that fail to ignite interest. The climax however is exhilarating and the patriotic angle does work to an extent.

Vidyut Jammwal proves yet again that he’s not just someone who can just do action well. If given a chance, he can carry a film on his shoulders and can do all that a typical Hindi film hero is supposed to do. Esha Gupta plays the difficult role with élan. She looks smoking hot. Adah Sharma initially is quite irritating as the Hyderabadi corrupt cop. But later, she turns out to be one of the most endearing characters especially when she opens up about her ordeal and kicks butt. Freddy Daruwala is alright and too serious but it works for his character. Sumit Gulati has a good screen presence. Vansh Bharadwaj leaves a huge mark. Thakur Anoop Singh (KP) is strictly okay and is there in the film only for a crucial fight with Vidyut. Adil Hussain and D Santosh are good in their cameos. Shefali Shah (Home Minister) seems totally in her character. Satish Kaushik, Suhail Nayyar and Siddharth Kher are fine.

Music has zero scope and thankfully, there are no songs at all in the film. Prasad Sashte’s background music is exhilarating. Manasi Aggarwal’s costumes are rich and glamorous, especially the ones worn by Esha and Adah. Chirantan Das’s cinematography is good and highlights the action quite well. Franz Spilhaus’s action is obviously one of the highpoints in the film. Though nothing new as compared to the first part, it makes for an exciting watch. Ritesh Shah and Suresh Nair’s story is fine and very topical. Dialogues are simple and funny, when it comes to Bhavana’s lines. Screenplay is faulty as there’s too much of twists happening that ruin the show to an extent. It’s great that all the principle characters are well written and each has a significant screen time. The girls are not just bystanders but are very much part of the action and madness happening. Deven Bhojani’s direction is good but doesn’t help much in simplifying the proceedings. Also, the unconvincing script makes matters difficult for Deven and he fails to mask it. He has the potential and here’s hoping he does better in his next project!

On the whole, Commando 2 is a topical film as it talks about black money. The performances are fine and as expected, it’s fun to see Vidyut beating up baddies in his style. Sadly, the film has too many twists and turns and double crossings which fail to make an impact after a point. A film like this will have cinematic liberties but Commando 2 has too many of them. This one is an average flick and can be seen if you are in a mood for some action extravaganza minus the logic. At the box office, this one is going to be an underperformer just like the first part!