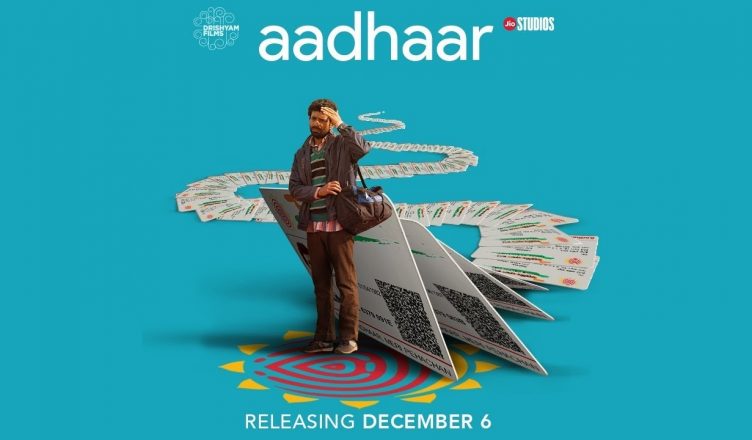 Producer Manish Mundra won many hearts two years ago through Newton, a political film without politicians, and based in a rural setting. Now he is back with a film in similar space, Aadhaar. And just like the 2017 film, Aadhaar turns out to be a funny and touching flick!

The story of the film: The year is 2010. Pareshnath Pandit aka Pharsua (Viineet Kumar) resides in Jamua village, Jharkhand. One day government officials Parmanand Singh (Saurabh Shukla) and Rastogi (Istay Arif Khan) pay a visit to Jamua to inform them about the new government scheme called Aadhaar. Both Singh and Rastogi try to enlighten the villagers about its benefits. But the Jamua residents don’t show interest. The day the Aadhaar centres commences, not a single resident turn up. Pharsua feels that having an Aadhaar can be beneficial for him. Singh even tempts villagers by claiming that they can get monetary benefit directly from government if they get their Aadhaar done. Pharsua feels he can get the cataract surgery done of his father (Raghuvir Yadav) if he avails of the services of Aadhaar. Hence he arrives at the centre to do the needful and thereby he becomes the first person in the whole of Jharkhand to get an Aadhaar card. A state minister even arrives to Jamua to honour Pharsua. Overnight he becomes a hero of sorts. However in a few days, the Aadhaar card, which was supposed to be a boon in his life, turns out to be a nightmare for him.

Aadhaar begins on a fun note as Parmanand faces a harrowing time in explaining the simpletons of Jamua the definition of an Aadhaar card. Things obviously get better as Pharsua takes up the initiative and gets his Aadhaar done. His speech sequence is also worth a watch. Once the conflict emerges, the film gets a bit serious, especially when the madness shifts from Jamua to Ranchi. A few scenes here are a bit unconvincing and also heavy. Also, Pharsua is shown to be too simple and unaware of the realities of life. This probably is how it is for many people who are blinded by superstition. But somehow, it doesn’t come out well in a few scenes. The finale thankfully is great.

Aadhaar boasts of a fabulous performance by Viineet Kumar. He gets back into his fabulous Mukkabaaz zone and puts up a great show. Your heart goes out to him in the second half, especially in a crucial scene where he breaks down. Saurabh Shukla is next best. His role is a bit in the Jolly LLB zone but he keeps the frustration level in check so that it doesn’t become a carbon copy. Thanks to a strong performer like him, the character of Parmanand Singh gets a nice touch. Prrithvi Hatte looks every inch an villager and lends able support. Istayak Arif Khan is the surprise of the film. His performance is fabulous and his one-liners and shayaris will bring the house down! Sanjay Mishra is extremely convincing as the conniving astrologer. Raghuvir Yadav is decent while Ekavali Khanna makes her presence felt as Dahiya madam. Other actors who do well are Vishwanath Chatterjee (Minister) and Amarjeet Singh (Kallu).

Suman Ghosh‘s story is superb and based on a great idea. It takes a very balanced view of Aadhaar card and also makes an interesting comment on the difference between India and Bharat, blind faith etc. Suman Ghosh and Amitosh Nagpal‘s screenplay is uncomplicated. The story moves in a linear fashion and does justice to all the characters. A few developments however are difficult to digest. Amitosh Nagpal‘s dialogues are one of the strengths of the film. The one-liners are either too funny or too sharp and are bound to induce claps!

Suman Ghosh‘s direction is neat. He does justice to the rural surroundings and one get sucked into the world of Jamua. The characterization is also done beautifully. The romantic track of Pharsua and his wife Rani (Prrithvi Hatte) might seem a bit needless at first but later, it turns out to be the most crucial factor of the narrative. On the flipside, he should have made some scenes convincing especially the way the villagers are shown to be extremely ignorant.

Shantanu Moitra‘s music gels well with the film and that’s about it. No song will linger in one’s mind for long. Background score is subtle and also dramatic. Ravi Kiran Ayyagari‘s cinematography is spectacular, capturing the locales of Jamua, Deogarh and Ranchi very nicely. Angelica Monica Bhowmick‘s production design is straight out of life. Same goes for Sachin Lovalekar‘s costumes. Bodhaditya Banerjee‘s editing is great and no complaints here.

On the whole, Aadhaar is a funny and an emotional tale that deserves to be seen for it’s interesting plot and script and fabulous performances. It releases on December 6 in India and here’s hoping it manages to pull audiences through a strong word of mouth!