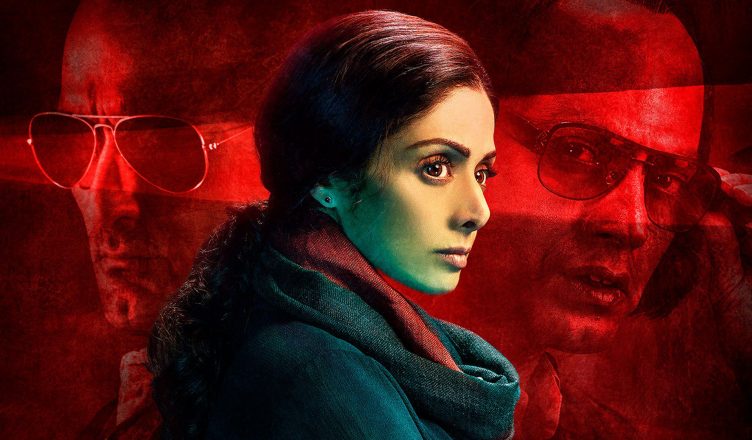 It was a rainy evening when Sridevi entered the room full of journalists and immediately, all eyes turned to her. She was having a no-make up look and yet, it was difficult to take one’s eyes off her. She apologized for the delay and enquired whether we had water and tea/coffee. It was great to see the actress, who is extremely shy and who doesn’t open up easily, but ended up talking like an extroverted person. Even during the course of the interview, she surprised everyone as she talked in detail not only about her upcoming film ‘MOM’, but also about other aspects like her real-life daughters, the process of choosing a film, how her own mother shaped her into a well-mannered human being and a lot more. She also shared some interesting anecdotes form the 80s era and at regular intervals, raised laughs too! Here are some excerpts from this very memorable interview.

What are the criteria for you while signing a film?
I just choose a film while thinking from my heart, not from my brain. When I hear a subject, it should touch my heart. I should feel good about the story.

How was it working with Akshaye Khanna? He said in a recent interview that it was difficult to work with you since you are so good at your work!
It was great working with him. It’s rare to work with a talent like him. He’s a very dignified, quiet and a very well brought up child. His personality is so powerful that he doesn’t even have to do anything – his smile, eyes or his mere presence is enough to lift up a scene.

Did Akshaye Khanna remind you of his father, Vinod Khanna?
Akshaye definitely has the charm and style of Vinod ji. As a performer, however, he has his own identity.

In today’s times when so many films have fallen prey to Censor Board’s scissors, were you happy to see that ‘MOM’ was passed with a U/A certificate and zero cuts?
Of course I was happy when I got to know that the film has been passed without a single cut. I am really grateful to the Censor Board. From the beginning, we were sure of one thing that ‘MOM’ is a family film. I want all the children and the parents to see the film. Boney ji (Boney Kapoor, producer and her husband) and Ravi were particular about it from the first day.

How much does the title of the film mean to you? Could you tell us some interesting anecdote about your own mother (Rajeswari)?
Well, it’s the most special relation of your life. The memories that you share with your mother never leave you. You keep missing her everyday of your life. It is very difficult to explain in words. My mother was never strict but she was always there for me when I was working as a child actor. Whether we are shooting in the rains or in snow or in extremely hot weather, she was there to ensure I was comfortable. Because of that, I don’t remember an instance wherein I have complained that “I am not well or I am tired and hence I won’t shoot today.” My mother also taught me a lot of important lessons like I should respect elders, be punctual, give my 100% etc.

You are a strong mother in real life as well. After doing this film, what lessons did you learn that you’d like to impart to your children?
I don’t need to give any message to my daughters Jahnvi and Khushi. They are very sensible. There’s a dialogue in ‘MOM’, “Usse samjhaane ki nahin, humein usse samajne ki zaroorat hai” (we don’t to have to make her understand, rather we should understand her). It’s an important dialogue and I am sure the teens are going to love it! And I completely agree with it – why lecture kids? Rather, we should be empathetic to the stress they go through.

What kind of mother are you?
I am more like a friend to my daughters. Sometimes, I am strict but not very. Thankfully, my kids have never given me the opportunity to run behind them with a stick in my hand (laughs). They know where I am coming from. They understand what I am trying to say and why and in turn, I also listen to them. They are from a different generation after all. I cannot expect my children to be the way I was with my mother. With time, the parents should also change.

How did your daughters react after watching the film?
My elder daughter Jahnvi didn’t say a word. She just hugged me. I felt really good! Boney ji had seen the film at every stage and even he’s happy with the final product. Khushi however has seen the rushes and not seen the final cut. She’ll watch it soon with her friends. But more than our reaction, it’s important that the audiences enjoy the film and come out of the theatre satisfied!

What does Sridevi have to say when she saw Sridevi on the big screen in ‘MOM’?
Actors are never satisfied watching themselves on the screen. I am constantly thinking that “I could have done a better job.” We never pat our backs after watching ourselves.

When is Jahnvi making her debut? In the remake of which film of yours would you like to see Jahnvi in?
It’s not my work to choose a film for Jahnvi. Also, it’s too early for me to talk about her impending debut.

But there are too many articles about her floating in the media. There have been reports that she’s doing a film with Ranbir Kapoor, Ishaan Khattar etc…
I just don’t want to talk about it. It’s very disturbing and I don’t feel the need to say anything.

What made you took such a long gap between your last Hindi film, ‘English Vinglish’ (2012)? It came almost five years ago…
There was no conscious decision as such. I don’t plan anything in my life. I actually never thought that I’ll do ‘English Vinglish’ after 15 long years. But that film fell in my lap and I went for it. Same goes for ‘MOM’. Two years had passed since ‘English Vinglish’ and I was enjoying its success. Then I got ‘MOM’ and I felt I should do it. That’s it.

The character that you played in ‘English Vinglish’ was loved by one and all. Many women, who can’t speak English, were able to relate with your character. Do you think that the same kind of impact will happen with ‘MOM’ as well?
The character in ‘English Vinglish’ was very simple and yes, everybody identified with her. I never thought that would happen. Not just mothers, even the daughters felt guilty and called their mothers after seeing the film. This was unexpected and I just don’t know whether the same will happen with ‘MOM’.

Credit however should go to you for playing that character so well! It touched everyone’s hearts…
I’ll however like to credit my director Gauri. She had a clear vision and I merely followed her instructions. But at the same time, artistes tend to be very observant. I had observed my aunt dressing up like my character Shashi. She was an office-going, well-educated lady though. As a child, I used to admire the way she used to talk and walk. I remembered her while prepping for the film and I used her mannerisms. So subconsciously, you start keeping real-life people’s characteristics in the back of your mind and when playing a character, you remember them and use them accordingly.

You have touched the peak of stardom. Did you ever have a ‘now-what-next’ moment?
I never felt like I have reached the peak. As an actor, I feel that every film is a learning process. I always think how I can be a better actor. I never thought that I have reached the topmost position. There’s no boundary for an actor. You can keep growing as much as you want.

Did you have any goal that you have to reach a certain stage? And besides acting, was there anything else that interested you?
My only goal was to do good work, work hard and give my 100%. I never knew how big I will become. I always left that to the audience.

How much has the film industry changed in all these years according to you?
Definitely, there have been a lot of changes. The director and the way of taking a shot are all the same though. Technically however, it’s unbelievable. The environment has changed. Then, we used to shoot on a film. After 10 retakes, we could see the producer in tension, with his hands on his head! He used to wonder what he’ll do if the reel gets over and there’s not enough stock left. It was a big thing then. But now it’s all digital. You can take as many takes as you want till you get it right. There’s also a monitor. Most importantly, we now have vanity vans (laughs)! I have shot in places like Rajahmundry, Visakhapatnam etc for films like ‘Himmatwala’ (1983), ‘Maqsad’ (1984), ‘Devatha’ (1982; Telugu film) etc where we had to go behind a tree, make a makeshift curtain around and then change clothes. And now with vanity vans, it feels like a golden period! Whole day I used to not drink water as the toilet facilities used to be very bad. In fact, I am so used to not having sufficient water even today!

You have done a lot of rain songs in your life…
(Cuts in) It was sheer torture!

…but most of them were hits like the one in ‘Mr India’, ‘Chaalbaaz’ etc. In real life, how much do you enjoy rainy season?
I am an outdoor person. I like to sit in my garden, going out in the evening for a walk or to jog. But it’s difficult to all these activities in the rains. As for the rain songs, I never enjoyed it. During the shoot of most of such songs, I used to have a high temperature.

It’s been 30 years since ‘Mr India’ released. How do you look back at the film? Even today’s generation enjoy the film as much…
It’s very heartening. People constantly ask me as to when we are coming up with ‘Mr India 2’. One day, it will be made for sure. But again, it’s too early to talk about it.

Just like you, there have been many actresses who left acting post marriage and then made a comeback. But the way you made a comeback, nobody else could do it. Some actresses have even wondered where they have gone wrong and why they couldn’t follow your footsteps. Raveena Tandon has admitted this on record. Your comments?
As I said, there was no conscious decision. It was sheer coincidence that Gauri thought of me and offered me ‘English Vinglish’. And I always go by my instincts. I felt like it’s a film that I’ll be able to relate and hence, I went for it. Otherwise, how big a film will become commercially is something that’s not in my hands.