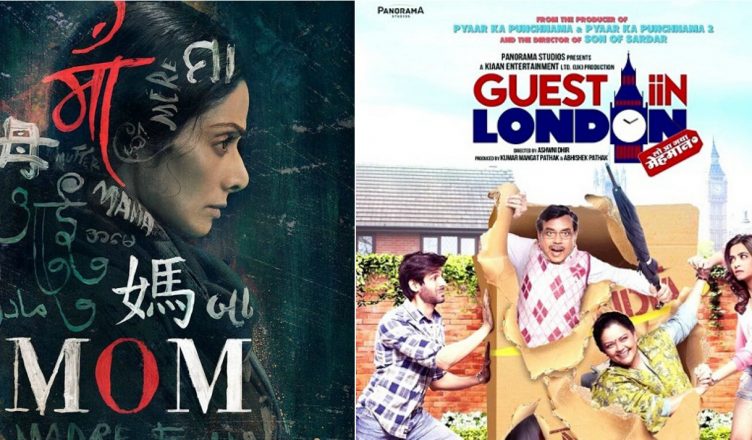 WILL MOM AND GUEST IIN LONDON HELP END THE SUDDEN DRY PERIOD AT THE BOX OFFICE?

The underperformance of Tubelight has been shocking because of which the occupancy at theatres have drastically reduced. However, things will change for better when Mom and Guest Iin London release this Friday. My views on these films:

MOM: This film marks another ‘comeback’ of Sridevi after English Vinglish (2012) that came out almost 5 years ago. It is directed by debutant Ravi Udyawar and produced by her hubby, Boney Kapoor. The trailer is intriguing and not much is known about the plot till now. The presence of Nawazuddin Siddiqui in an unrecognizable avatar and reclusive Akshaye Khanna has added to the curiosity. The film also stars Pakistani actors Sajal Ali and Adnan Siddiqui. Thankfully, the shoot of the film was over before the Uri attacks took place last year, after which a ban on Pakistani actors was placed. Songs haven’t made much impact but they might grow once the film releases. The film is carrying great reports and hence, it can grow drastically and emerge as a commercial hit if the audiences like the film too.

GUEST IIN LONDON: It was earlier titled Atithi Iin London and was supposed to be the second part in the Atithi franchise after the successful Atithi Tum Kab Jaoge, produced by the same makers (Abhishek Pathak). However, Atithi Tum Kab Jaoge was co-produced by Warner Bros and they have the rights to make its sequel. As a result, the name of the film was changed to Guest Iin London. The premise however is similar to Atithi Tum Kab Jaoge – an irritating guest lands up at the house of an urban couple and wreaks havoc. Once again, the guest is played by Paresh Rawal and he is also joined by Tanve Azmi. But the couple is played by Kartik Aaryan and Kriti Kharbanda and the madness takes place in London instead of Mumbai. The trailer seems interesting but sadly, the buzz is low. If reports are bad, it can bomb immediately, more so if Mom gets lot of appreciation. And not just Mom, Guest Iin London also has to compete with the Hollywood biggie, Spider-Man: Homecoming, which also reportedly got unanimous praise from all those who have seen it.

WHICH FILM WOULD YOU LIKE TO SEE OUT OF THESE AND WHY? DO LET ME KNOW!