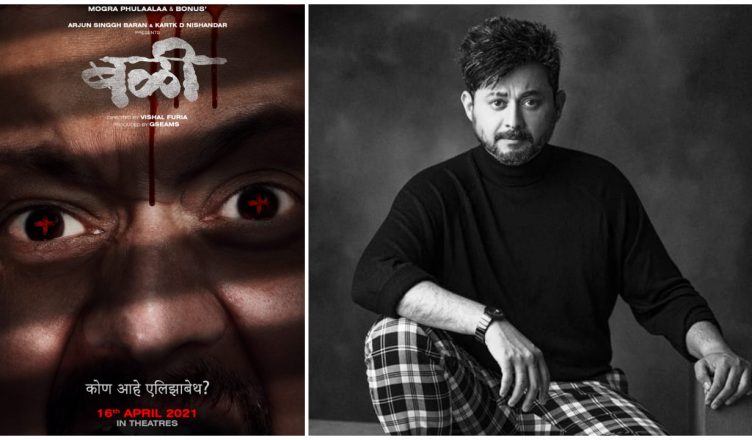 The motion poster of the much awaited Marathi horror film Bali was released today. It is directed by Vishal Furia and stars Swwapnil Joshi in the lead role. The makers also announced with this poster that the film is all set to release in CINEMAS all over Maharashtra on April 16, 2021.

The motion poster consists of Swwapnil’s fearful face. A horrifying background score plays while blood begins to trickle down his forehead. Images of red-coloured cross can be seen in his eyes. And then the tagline, कोण आहे एलिझाबेथ (Who is Elizabeth) appears below. All these aspects make for a great watch. Despite being just 15 seconds long, the motion poster manages to leave a tremendous impact.

Bali is produced by GSEAMS, the producers of many hit films such as Mogra Phulaalaa, Bonus and also the web series Samantar and Naxalbari. Vishal Furia had shot to fame by his hit thriller Lapachhapi, released three years ago. He also directed the popular web series Criminal Justice with Tigmanshu Dhulia.

Speaking about the film, director Vishal Furia said, “Lapachhapi was well received by the Marathi audience proving that they love the horror genre. Hence, I really want to continue making horror films for the Marathi audience and this is another such attempt.” He also added, “With a star like Swwapnil Joshi on board, who has been loved by the audience, and maverick producers Arjun Singgh Baran and Kartik D Nishandar backing my second horror film, Bali will prove to be much scarier and thrilling than Lapachhapi. I feel Swapnil’s talent as an actor has not been explored fully till date. And after meeting him, I was confident that he would be fit for this role. Plus, he’s a star and that will help our film reach the masses as well.”

Excited about the film, Swwapnil Joshi said, “I had promised the audience of the Marathi film that I would explore a new genre this year. This film is a small step taken by me in that direction. I am very happy to get into the horror space. I am happy that I have got an opportunity to do it with my favourite people like Arjun and Kartik, and my favorite director in this field, Vishal. I am sure that we together could scare the audience and make them enjoy it.”

He added, “If you think of it, barring Vishal’s Lapachhapi, the Marathi industry has never had horror films per se. There were horror comedies, but not films that gave you sleepless nights. I think Bali will fill that void. What’s more interesting is that the film’s story induces fear and not the usual jump-scares or loud music that Indian horror films try to scare people.”

“We are happy to venture into a new genre with Bali. And who better than Vishal Furia to direct this horror film? Lapachhapi is considered as one of the best horror films in recent times. We also have one of the top actors of the Marathi industry, Swwapnil Joshi, in the lead. Even for him, this is an opportunity to explore a different genre,” says producers Arjun Singgh Baran and Kartk D Nishandar from GSEAMS.