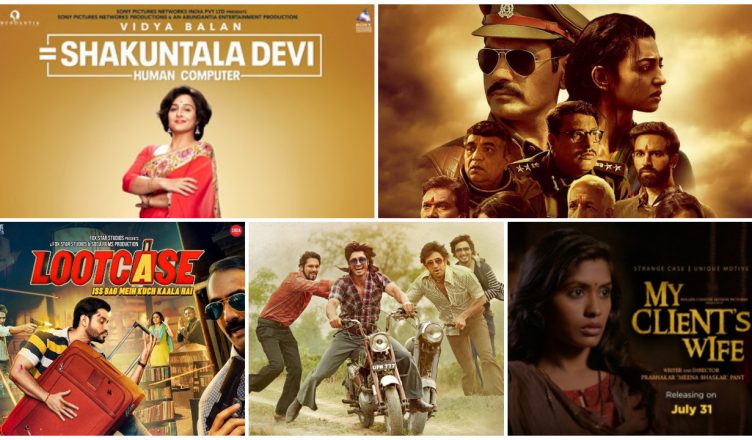 5 FILMS TO CLASH ON OTT THIS WEEKEND!

2 weeks back, we had informed you that as many as 4 films are going to release on the internet this week. But now it has emerged that one more film has joined the race! This makes it 5 films to premiere this weekend. My analysis on these films:

1. SHAKUNTALA DEVI (Amazon Prime): It is based on the world famous mathematician Shakuntala Devi and her relationship with her daughter. It stars Vidya Balan, Sanya Malhotra, Amit Sadh and Jisshu Sengupta and is directed by Anu Menon, who co-directed Four More Shots Please. The trailer looks vibrant and entertaining with Vidya in full form. Not many know about Shakuntala Devi’s life story and hence, the film has that advantage. However, it seems an attempt has been made to show the character as quite outgoing and dramatic, which the real Shakuntala was not in real life. Also, the mother-daughter bond seems tricky and if not handled well, the film can fall like a pack of cards.

2. LOOTCASE (Disney+ Hotstar): It is a comic caper starring Kunal Kemmu, Rasika Dugal, Vijay Raaz, Gajraj Rao and Ranvir Shorey. It was to release last year on October 11 in cinemas but then reports came that it’ll arrive on Netflix. The makers a few weeks later clarified that the film will come in cinemas but it won’t make it on October 11. Instead, it’ll arrive on April 10, 2020. This date raised eyebrows as it was the same day when one of the biggest films of the year, ’83, was to release. Lootcase is a small film and would have got crushed in front of a juggernaut like ’83. But when lockdown came in force, the makers still waited and were hoping that Lootcase would be the first film to release in cinemas once cinemas reopen. However, with the lockdown going on and on, the makers then took the decision to once again put it on OTT, this time however on Disney+ Hotstar. The film looks like a nice, clean laugh riot. Kunal suits his part and even the supporting cast seem apt.

3. RAAT AKELI HAI (Netflix): It marks the directorial debut of casting director Honey Trehan and has an ensemble cast comprising of Nawazuddin Siddiqui, Radhika Apte, Tigmanshu Dhulia, Shweta Tripathi, Shivani Raghuvanshi, Nishant Dahiya, Ila Arun, Swanand Kirkire and Aditya Srivastava. It is a story of a cop investigating the mysterious death of a powerful local politician in Uttar Pradesh. The trailer failed to make an impact. But with so many great actors and the setting being interesting as well, Raat Akeli Hai can make for a nice watch, especially if it’s well-made.

4. YAARA (Zee5): This is a long-delayed film, directed by Tigmanshu Dhulia. It stars Vidyut Jammwal, Amit Sadh and Shruti Haasan and is about a group of friends who are criminals. The story focuses on their 20-year-long association. The trailer is decent but the fact that it was delayed for so long makes one wonder if there’s anything wrong with the film. This is the only film out of the 5 films which releases today, that is, July 30, and not on July 31.

5. MY CLIENT’S WIFE (ShemarooMe): It is one of the first or the first original film on the ShemarooMe. It stars Abhimanyu Singh, Anjali Patil and Sharib Hashmi and is about a man convicted of physically assaulting his wife. His lawyer gets shocked as some uncomfortable details tumble out about both the man and wife during the course of his investigation. The trailer is intriguing but the direction seems average. Also, the suspense has to be shocking in such films and if it’s not, it can prove disastrous. The biggest problem however with the film is that it’s coming on a platform which many people have not even heard of. Hence, it’ll get ignored by majority of audiences. If it’s well made, it might find audiences later on when the platform becomes popular.