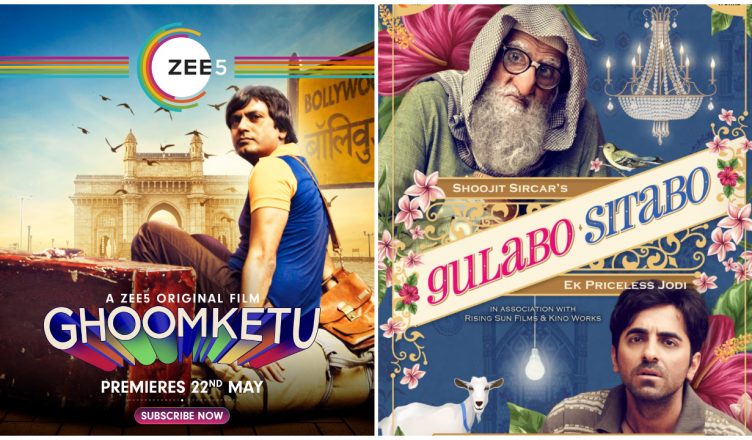 Since the past few weeks, there have been discussions going around about films which might skip theatrical release and arrive directly on OTT, due to the Coronavirus-induced lockdown. Due to the pandemic, the theatres have been shut and there doesn’t seem to be any clear answer on when it’ll be allowed to function. Even if cinemas are given the go-ahead to open, they might have to adhere to norms like alternate seats being kept vacant, deep cleaning after each show etc which would have led to reduced shows and reduced footfalls. Hence, many filmmakers decided to toy with the idea of taking their film directly on OTT.

The names of several films were tossed around but none of them made it official. However, in the past few days, two films finally admitted about their OTT plans. The first one was the long-delayed Nawazuddin Siddiqui-starrer Ghoomketu. The talented actor plays a struggling writer in this flick which features cameos by Ranveer Singh, Sonakshi Sinha, Amitabh Bachchan and others. The film now releases on Zee5 on May 22, which is also the Eid weekend. That this film skipped theatrical release is not a surprise. Even in normal times, it would have been tough for it to get sufficient shows and who knows, even if the pandemic had not happened, it would have still made it to digital platform.

Today morning, the makers of Gulabo Sitabo ended weeks of speculations by revealing that their dramedy is indeed releasing on Amazon Prime. It stars Amitabh Bachchan and Ayushmann Khurrana and is set in Lucknow. Directed by Shoojit Sircar, the film seemed to be in the zone of his 2015 classic Piku. Hence, the hype for the film was sizeable among the multiplex audiences and the film would have, as a result, opened very well. Not to forget, Ayushmann Khurrana’s films are working big time and hence, his pairing with Big B would have added to the excitement. Sadly, the film didn’t have studio support and it must have been difficult for the makers to hold the release and thereby bear the increasing costs. So, they must have taken this tough decision.

The release of Ghoomketu and Gulabo Sitabo would not raise lot of eyebrows as there are still quite smaller films with major appeal in multiplexes of 10-15 cities. But when a biggie, of the size of Laxmmi Bomb, arrives online directly is when a huge controversy will erupt. Here’s hoping the bigger films and even the mid-sized films which are backed by studios don’t take the OTT bait and instead wait for cinemas to open!