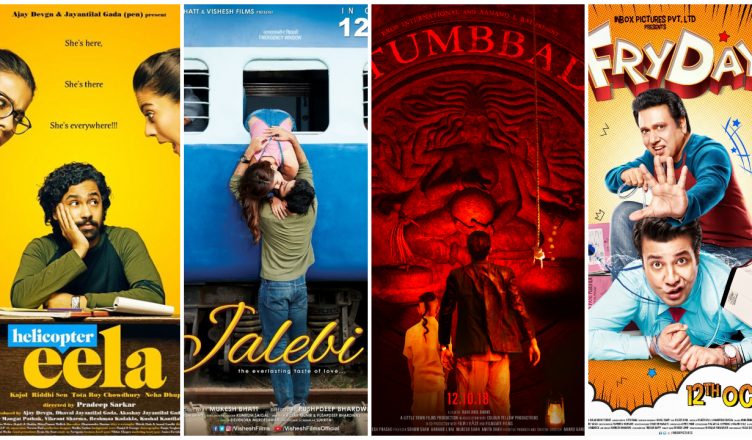 It’s going to be a chaotic and frightening Friday as 4 medium-budget films will try their luck at the box office. None of the films look that exciting and can have poor openings. Thankfully, AndhaDhun, released last week, is doing exceptionally well at the box office and it’ll save the day to an extent. My analysis:

HELICOPTER EELA: It stars Kajol and National Award Bengali actor Riddhi Sen. It is based on the Gujarati play Beta Kaagdo, written by Anand Gandhi. Pradeep Sarkar directs this light-hearted flick while Ajay Devgn has produced it. The trailer is sweet and funny but doesn’t give viewers a high. It was to release in September but it was postponed in August when Pradeep Sarkar was hospitalized. The songs haven’t worked, including the remix of Ruk Ruk Ruk. The opening is expected to be in the Rs. 1-2 crore range and a positive word of mouth might help the film reach the Rs. 25 crore mark.

JALEBI: It is produced by Mahesh Bhatt and it’s the first film of Vishesh Films after more than a year. A remake of Bengali film Praktan, it stars Rhea Chakraborty, Varun Mitra and Digangana Suryavanshi. It also marks the directorial debut of Pushpdeep Bhardwaj. The film looks in big trouble as the trailer hasn’t worked at well. Bhatt’s films are known for its songs but in case of Jalebi, even the songs have failed to get notice. The opening is expected to be less than Rs. 1 crore and it seems all set to be a disaster.

TUMBBAD: This is a horror film and produced by Anand Gandhi, on whose play Helicopter Eela is based, incidentally. Anand Gandhi had earlier directed Ship Of Theseus which had Sohum Shah as actor and produdcer. Tummbad also has him as co-producer and also lead actor. The trailer is eye catching and it looks like a unconventional scarefest. The awareness however is negligible. But a good word of mouth can help the film get decent crowd in multiplexes of cities.

FRYDAY: It features Govinda, Varun Sharma and Digangana Suryavanshi in leading roles and is directed by Dolly Ki Doli director Abhishek Dogra. The film was to release in May initially but was postponed for certain reasons, one of them being that it was reshot a bit, as per inside news. The trailer is quite okay and doesn’t look that funny that would attract people to cinemas. This film, hence, would also have an opening of less than Rs. 1 crore.