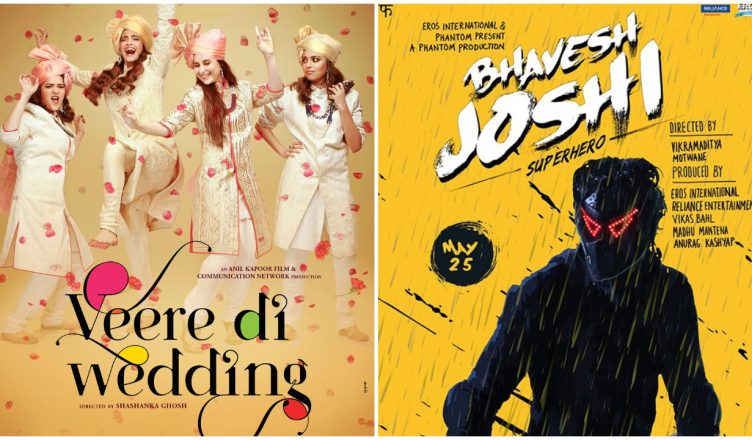 The Ramzan period is usually dry when it comes to film releases. Yet, tomorrow, 2 significant medium-budget films are all set to clash. What’s interesting is that while Veere Di Wedding stars Sonam Kapoor, the other release – Bhavesh Joshi Superhero – features her brother Harshvardhan Kapoor in a leading role. My analysis:

VEERE DI WEDDING: It is a female bonding flick with a great star cast comprising of Sonam Kapoor, Kareena Kapoor, Swara Bhasker and Shikha Talsania. It is produced by Sonam’s sister Rhea and Ekta Kapoor and directed by Shashanka Ghosh, who directed Sonam in Khoobsurat. The film talks about four friends and all the madness that happens when one of them decides to get hitched. Since the four women are modern, progressive and urban, the makers have not hesitated in using abusive language and this has given the film a novel touch. Also, the album is foot-tapping with Tareefan already a chartbuster. The film was to be shot way back in 2016. But Kareena Kapoor got pregnant. Still the plan was to go ahead and film but getting insurance for her in this stage was not possible. Hence, the film’s shoot was pushed by a year. It’s great that the makers didn’t replace Kareena as her pairing with Sonam has given the film brownie points. The promotions of the film have worked well. Sonam surprisingly got married just around 20 days before Veere Di Wedding’s release and it was believed it was done as part of the film’s promotion. Also, she walked at the Cannes Film Festival a week later and this also gave a further boost to the film. Swara, Kareena and Sonam in April protested against the Kathua rape by holding placards and a section of moviegoers got upset because of it. A ‘Boycott Veere Di Wedding’ movement began on social media but it soon lost fizz. Nevertheless, the film still faces some challenges. The buzz is there but is not tremendous. Also, the content is such that it can work only in urban areas and not pan India. This coupled with Ramzan can prove detrimental. It’s not even a family entertainer due to the adults-only certificate. Hence, the film needs to be really good and have a very positive word of mouth. Only then it can prove to be a profitable venture.

BHAVESH JOSHI SUPERHERO: This Harshvardhan Kapoor starrer is directed by Vikramaditya Motwane and as the name suggests, it has a superhero touch. The film was planned way back in 2013 with Imran Khan at first and later with Sidharth Malhotra. But the film was put on backburner after BJP came to power in 2014. It finally went on floors last year. At first, the film was scheduled to release on May 25 and clash with John Abraham starrer Parmanu. But suddenly it was announced that it’ll be postponed by a week. It is bewildering why the makers did that. The postponement served no purpose. The makers perhaps thought that it’ll give them publicity as the media will talk about the siblings clashing at the box office. But it hasn’t translated into excitement for the film. The trailer is interesting but the buzz is very limited. Despite being a superhero film, the kids are not the target audience here. The opening will be poor and it’ll be Veere Di Wedding or last week’s Parmanu that would be the first two choices of the viewers this weekend. If word of mouth is very positive, only then Bhavesh Joshi Superhero shall have some chance to score at the ticket window.