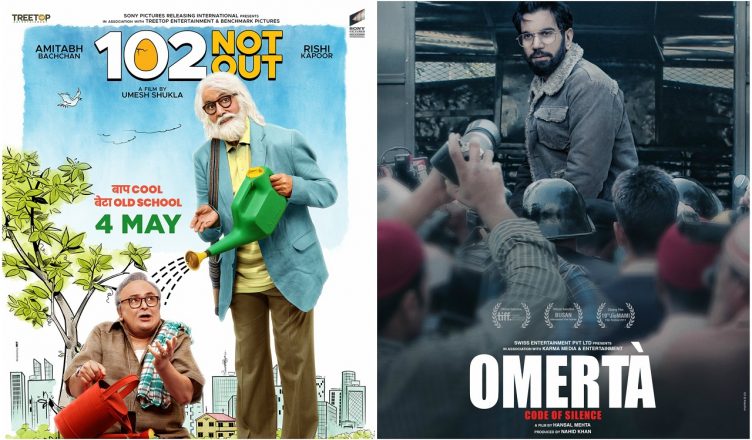 WILL 102 NOT OUT AND OMERTA WORK DESPITE BLOCKBUSTER AVENGERS: INFINITY WAR?

The last week’s big release Avengers: Infinity War has emerged as a huge, huge success. Despite releasing on a non-Holiday, it has done super hit business and managed to cross the Rs 100 crore mark in just 4 days. It is sure to cross the lifetime figure of 187.98 crore of The Jungle Book, which is the biggest Hollywood blockbuster of India. Trade pundits even predict that Avengers: Infinity War can even cross the 300-crore-mark if it sustains well in the 2nd week.

Unusually, at such times, releasing a film can be quite a risk. But the makers of 2 Hindi films are anyways going ahead with the release tomorrow. My analysis on these 2 flicks:

102 NOT OUT: It is directed by Umesh Shukla, who made the much-loved OMG Oh My God. It stars Amitabh Bachchan and Rishi Kapoor and is a tale of a guy who’s more than 100 years old but is still youthful but his 75-year-old son is completely opposite. The film looks like a clean family entertainer and hence, family crowds can come to see this film in hordes. Also, the fact that Rishi Kapoor and Big B have teamed up after almost 27 years has also generated excitement. Songs haven’t worked and the buzz is limited. The day 1 figures won’t be high but if word of mouth is positive, it can dramatically pick up from Day 2.

OMERTA: Directed by Hansal Mehta, Omerta tells the story of Omar Sheikh, one of the most dreaded terrorists of the world who’s also responsible for some of the gruesome killings in and around India. Rajkummar Rao plays the lead in this 96 minute long flick. The trailer and idea behind the film is interesting but the buzz is very low. Opening will be poor and if reports are positive, only then it will get more people from Saturday. However, since it’s a very dark film, a huge jump in collections might not happen. Critically, it definitely will be acclaimed.