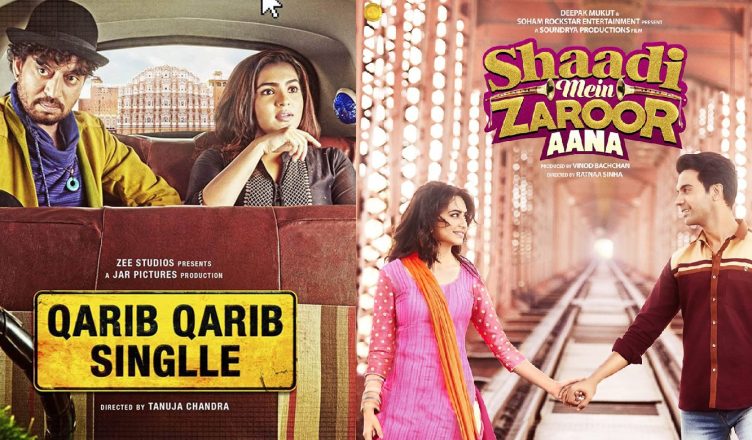 The month of November is all set to be dominated by small and medium budget releases. Not a single biggie is releasing and hence, all these films will try their luck before the event film Padmavati takes over on December 1. This week, 2 small films are releasing. Both look interesting but the buzz is limited. My analysis:

QARIB QARIB SINGLLE: It is directed by Tanuja Chandra, known for intense films. But this flick is quite light-hearted and seems interesting. It is the story of a couple who meets on a dating website and then goes on a cross-country trip. Irrfan Khan looks great and in his element as always. Southern actress Parvathy also seems to be a great actor and it’ll be great to see their chemistry. The film has some funny scenes and the travel bit can be interesting to see. At the same time, the film looks quite niche and hence, its opening will definitely be affected. Irrfan Khan however has carved a niche thanks to films like Piku and Hindi Medium. So, if Qarib Qarib Singlle gets good response, its collections can go up significantly from Day 2.

SHAADI MEIN ZAROOR AANA: The trailer of the film is highly impressive – when it begins, it gives a feeling of a cute love story set in a small-town in North India. But suddenly, it changes into a kind of a revenge drama. Rajkummar Rao is the male lead and he looks quite great in the romantic as well as I-am-gonna-finish-you avatar, at least in the trailers. Kriti Kharbanda, last seen in Raaz Reboot and Guest Iin London, is cast opposite him. The trailer raises curiosity as one wonders what exactly went wrong and why Rajkummar is hell bent on destroying Kriti. There’s also an apprehension that the twist in this film might be similar to Badrinath Ki Dulhania. Despite the great trailer, the excitement for the film is very low. Songs haven’t worked. Its opening is definitely going to be less than Qarib Qarib Singlle and its upto the content to do the talking and attract moviegoers in hordes.