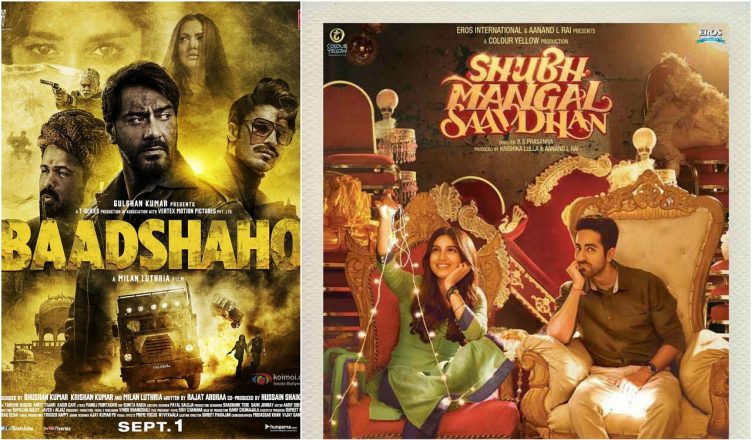 The last week was terrible. All the five films flopped big time. The losses increased thanks to violence in the North and heavy rains in and around Mumbai. But this Friday should be interesting as two highly exciting films are up for release. My analysis:

BAADSHAHO: It is a rare multi-starrer in today’s times, starring Ajay Devgn, Emraan Hashmi, Ileana DCruz, Esha Gupta, Vidyut Jammwal and Sanjay Mishra. It is directed by Milan Luthria, who has become highly respected after the success of Once Upon A Time In Mumbaai and The Dirty Picture. The trailer is highly exciting and the film looks like a masala Hindi action entertainer, which is the need of the hour in today’s times. At a time when films are becoming more and more urban which thereby restricts its appeal, here’s a film which has a great star cast and which looks like a complete entertainer. The songs have also worked, especially Mere Rashke Qamar and Piya More. The latter features Sunny Leone and looks sizzling hot. The buzz isn’t skyhigh but it looks like a film that should open very well. If all goes good, it can have a huge weekend and can also sustain well for a long in theatres. This is also because the films releasing for the next three weeks are low-cost, multiplex films. Hence, Baadshaho can have a clean run till Judwaa 2’s release on September 29. But if the reports aren’t positive, the collections can quickly come down.

SHUBH MANGAL SAAVDHAN: This is also a unique film as it deals with the taboo subject of performance anxiety. But it is in the Vicky Donor zone, as it features Ayushmann Khurrana and also because the subject is handled sensitively. The humour is there in abundance but due care has been taken that they don’t make it indecent and vulgar. It’s a remake of a South film and the same person is the director of the remake, R S Prasanna. Besides Ayushmann, Bhumi Pednekar features in this small-town saga. The trailer is hilarious and surely one of the best in recent times. Incidentally, Ayushmann just had a release two weeks ago – Bareilly Ki Barfi. Both films look too similar and there’s a fear that viewers might not go for Shubh Mangal Saavdhan or they might not understand that these are two different films. Alternatively, Bareilly Ki Barfi was accepted nicely and that can also boost the collections of Shubh Mangal Saavdhan. Its opening definitely won’t be huge but it can grow very well, like Bareilly Ki Barfi or it may do even better. The competition from Baadshaho won’t be a problem as such as both films are different in all respects.