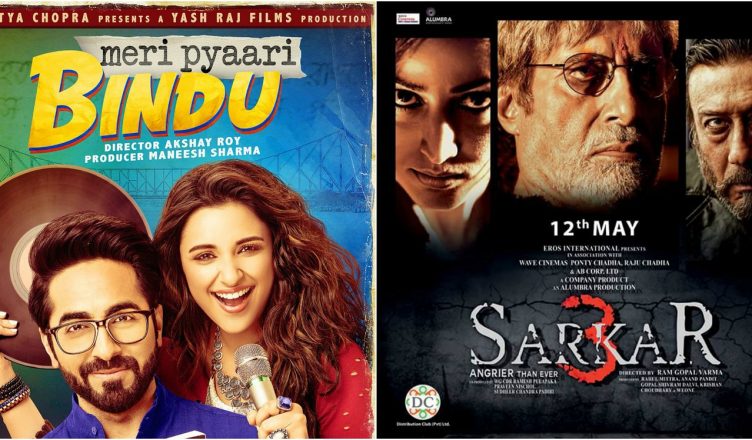 The Baahubali 2 wave is still going strong. The 2 Hindi films releasing tomorrow will surely bear the brunt of it. But even if Baahubali 2 was not there, both these movies would have still faced a tough time. My views on these films:

MERI PYAARI BINDU: It is Parineeti Chopra’s first film after almost 2 ½ years – her last film Kill Dil released way back in November 2014. It also stars Ayushmann Khurrana and is produced by Yash Raj Films. Newcomer Akshay Roy, who was at one point going to direct Badtameez Dil starring Emraan Hashmi and Kareena Kapoor, is the director. The promotional strategy is slightly different – the makers came out with 5 trailers, calling each of them as chapters. Before that the song Maana Ke Hum Yaar Nahin was unveiled which is sung by Parineeti herself. Songs in fact are quite melodious and have got noticed. Ayushmann-Parineeti look damn good together. Yet, the excitement is very limited. The opening hence would be average at best. But the film’s premise and setting has potential and can work if reports are positive.

SARKAR 3: This is the third part in the Sarkar series after Sarkar and Sarkar Raj. It stars Amitabh Bachchan, Amit Sadh, Yami Gautam, Rohini Hattangadi, Manoj Bajpayee, Jackie Shroff and Ronit Roy in principle roles. The trailer looks fun although it lacks the punch of the earlier two parts. Also, Sarkar itself isn’t that successful as a franchise – the first part was a semi-hit and popular only in Maharashtra due to the local flavor. The second part got mixed response and was below average. The franchise isn’t memorable as a result. No wonder there’s hardly any excitement for Sarkar 3. A good word of mouth can salvage the film although the chances of commercial success seem remote.