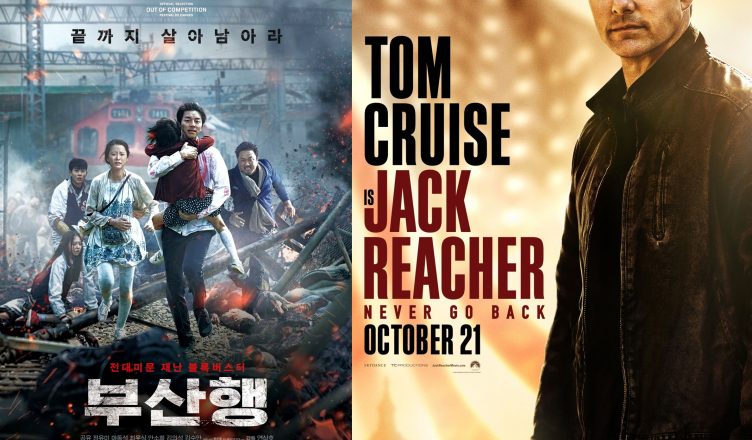 KOREAN FILM TO DOMINATE BOX OFFICE FOR A WEEK?

Train To Busan is a highly successful film from Korea and it has worked big time in other countries as well. It’s about how passengers struggle to survive in a train full of zombies. The movie has loads of action and thrill and to ensure it reaches to as many as people as possible in India, it has been dubbed in Hindi too. The buzz for the film is less but even with 10% opening, it can be the no 1 film of the week.

What can give a tough competition to Train To Busan is the Hollywood film Jack Reacher – Never Go Back. It stars Tom Cruise and although the first part wasn’t a huge hit in India, the sequel can still work and open better than Train To Busan due to Tom’s presence.

Meanwhile, like last Friday, there will be multiple Hindi releases this week too. But unlike last week, as many as 7 Hindi films are releasing tomorrow! This is nothing short of suicide since a week before Diwali is the worst week to release a film – people are busy with pre-Diwali preparations and shopping. Viewers aren’t generally interested to see a film and even if they do, they might not waste in small-budget films that nobody has heard of. Love Day, starring Ajaz Khan, that was to release last week, will now release tomorrow. The title has double meaning and Ajaz has tried to show his nationalist side but these things will hardly benefit the film. 31st October looks good but there’s hardly any awareness about the movie. Gandhigiri stars Om Puri and again, nobody knows the film is releasing, forget being excited for it. 1:13:7 – Ek Tera Saath, Mmirsa, My Father Iqbal and Final Cut Of Director (dubbed film; stars Nana Patekar and Kajal Aggarwal) might have less than 5% collections.

Thankfully, the dry period gets over next week when the Diwali biggies – Ae Dil Hai Mushkil and Shivaay – will release!

WHICH FILMS WOULD YOU LIKE TO SEE OUT OF THESE AND WHY? DO LET ME KNOW!