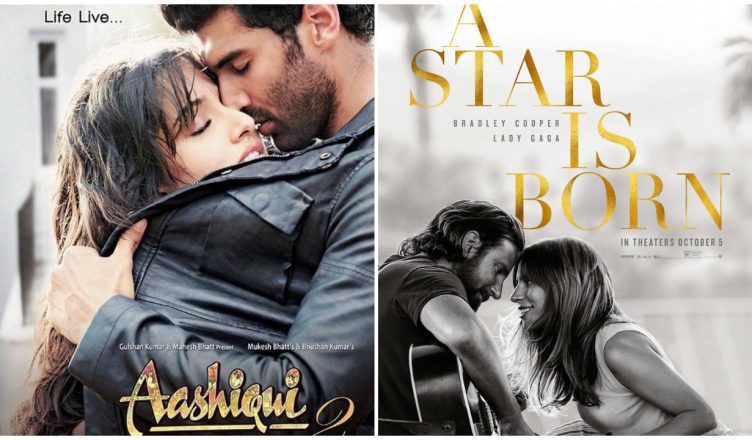 In June 2018, moviegoers and netizens went in a tizzy after they saw the theatrical trailer of the upcoming Hollywood film, A Star Is Born. The trailer after all had a very uncanny resemblance to that of the 2013 blockbuster Aashiqui 2. It often happens that it’s the Bollywood films which give a déjà vu of Western or sometimes Korean films. For years, filmmakers made a killing by lifting scenes or sometimes the entire plot from a foreign film and then neatly Indianizing it. But then awareness grew as audiences in India started watching films from all over the world and they could instantly guess if an upcoming film is a rip off. The advent of social media gave the users a platform to expose these wrongdoings. Also, legally, the filmmakers could no longer copy foreign movies as most of the Hollywood studios set up their offices in India.

As a result, the accusations of A Star Is Born being copied from Aashiqui 2 were quite significant. It was one of those rare episodes when the Westerners have supposedly copied a Hindi film, that too without obtaining rights! As a result, Twitterati was abuzz with this bit of information. After all, the similarities between the two were far too much. Aashiqui 2, starring Aditya Roy Kapur and Shraddha Kapoor, was a story of a famous singer whose career is fading away due to his excessive dependence on alcohol. This is when he comes across a small time singer and turns her into a rising star. His alcoholism however refuses to leave him and he has no choice but to end his life by jumping into the sea, especially when he realizes that she might put her career at jeopardy because of him. A Star Is Born meanwhile is not only directed by Bradley Cooper but also features him as the lead actor, co-writer and co-producer. Just like Aashiqui 2, this flick is also about a hard-drinking country musician who discovers and falls in love with a young singer (essayed by Lady Gaga). Quite a few scenes from the trailer seem extremely similar to Aashiqui 2 and no wonder that it became a hot topic on social media.

So what’s the truth? Is A Star Is Born indeed a plagiarized version of Aashiqui 2? Then why don’t Aashiqui 2 producers (Vishesh Films and T-Series) take action against this giant Hollywood film that recently premiered at the 75th Venice International Film Festival? Well here’s some truth. It’s not A Star Is Born that has copied from Aashiqui 2 but unfortunately, it’s the latter that probably is a rip off, yet again! How, you may ask? After all, didn’t Aashiqui 2 come five years before A Star Is Born? The truth is that Bradley Cooper’s film is an official remake of a film of the same name made in 1937. It was later remade in 1954 and 1976 as well. Warner Bros Pictures made the 1954 and 1976 versions and they had plans to make another version of this classic story since 2011, two years before Aashiqui 2 released. It was only in 2015 that Bradley Cooper was finalized to direct the flick which releases worldwide on October 5, 2018.

Just gazing through the synopsis of the older versions of A Star Is Born will tell you that Aashiqui 2 lifted most of those film’s scenes. In Aashiqui 2, the male protagonist jumps off a bridge that’s above the sea. Even the Hollywood films in question had a similar finale. In Aashiqui 2, the female protagonist in the very last scene signs her name as ‘Aarohi Rahul Jaykar’ in a fan’s handbook as a tribute to her love and her unfulfilled desire to marry him. In A Star Is Born’s 1937 and 1976 versions, the female lead identifies herself as ‘Mrs. Norman Maine’!

It is unclear why netizens and social media users didn’t raise a hue and cry about these similarities. Just seven months before Aashiqui 2’s release, Barfi had hit theatres and despite enjoying critical acclaim, it bore the brunt of its scenes being lifted from several films. It’s indeed luck that Aashiqui 2 makers didn’t face such kind of negativity. Also, they were saved from legal troubles by Warner Bros team. The film became a huge success and established Aditya Roy Kapur and Shraddha Kapoor as commercial lead actors. It’s music became a nationwide craze and still has tremendous recall value. It remains to be seen whether Aashiqui 2 would suffer backlash now, five years hence, as A Star Is Born’s release nears!