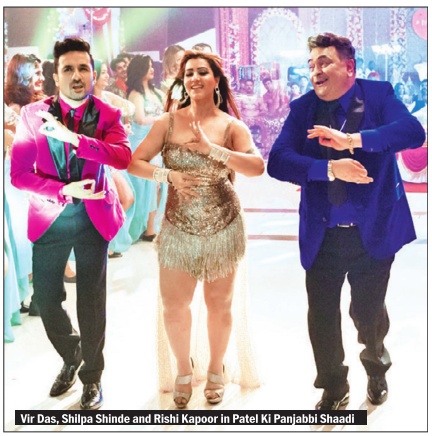 Shilpa Shinde was in the news recently after her controversial exit from the popular TV show Bhabhi Ji Ghar Par Hai. The actress now makes her big screen debut with an item number in Sanjay Chhel’s film Patel Ki Panjabbi Shaadi in which she gets to shake a leg with veteran actors Paresh Rawal and Rishi Kapoor and funny man Vir Das.

Patel Ki Panjabbi Shaadi is a cross cultural comedy in which Rishi plays a loud Punjabi and his personality crush with Paresh, who is a traditional Gujarati. The film is in the making since 2 years and it seems the makers are doing minor changes in the film to make it more relevant and exciting. The item song seems to be the result of it which in the movie is set during an enagement.

What’s interesting is that Shilpa is voluptuous and not thin as other heroines. Yet, from the still of the song, it is evident that she looks sizzling hot. Director Sanjay Chhel calls her a male fantasy and that she fits the bill. He thinks that she has a great combo of sex appeal and sanskari image and hence would appeal to a wide range of audiences.

Shilpa however would have loved to lose weight but she couldn’t as there was no time and it was the film’s last schedule. She revealed that she had heard that Rishi is moody but was surprised that he is quite friendly. She however admitted that Rishi chided him for leaving the show mid-way. “Artistes ko chalti gaadi se nahin utarna chahiye,” he pointed out. But Shilpa handed it well by saying, “Aag lagi aur mujhe koodna pada”