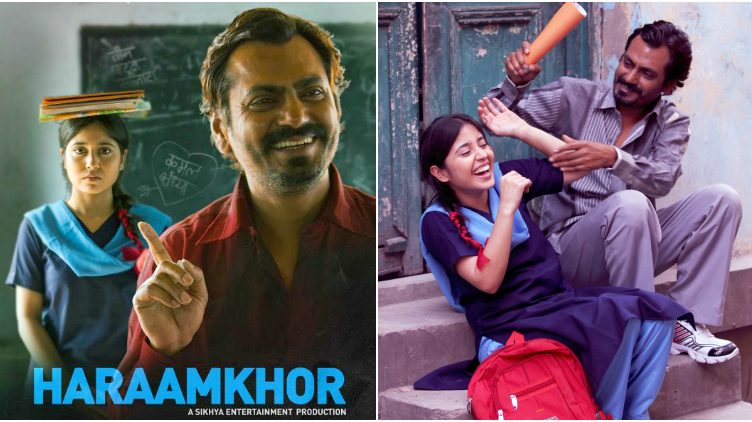 When a film is titled Haraamkhor, one obviously expects it to be dark and maybe even violent and depressing. But it is always nice to see a director giving viewers a pleasant surprise by going much deeper than what a film is intended to be. Haraamkhor, directed by Anurag Kashyap’s protégé Shlok Sharma is one such film that presents a tale that is very dark and immoral of sorts, but it is told in the most sensitive and entertaining manner possible!

The story of the movie: Sandhya (Shweta Tripathi) is a teenager in a small town who lives with her father with whom she has a dysfunctional relationship. She falls for her school and tuition teacher Shyam (Nawazuddin Siddiqui). Both start having an affair despite Shyam being married to Sunita (Trimala Adhikari). Trouble arises when Kamal (Master Irfan Khan), Sandhya’s classmate, also falls in love with Sandhya. And he is assisted by the very wise Mintu (Master Mohd Samad) in his ‘mission’ to win over Sandhya.

Honestly, the first 5-7 minutes of Haraamkhor are not that great. One doesn’t quite understand what’s going on and it’s only after a few minutes that one gets a hang of things. And when that happens, there’s no looking back. The characters are quirky and their interactions with each other make for a great watch. Also, each principle character is treading on a wrong path and is bound to hit a dead end, and yet they carry on. But it looks extremely convincing, and entertaining. The manner in which Shlok balanced both the dark and funny moments and delivered a well-balanced film deserves brownie points. Haraamkhor has a low-budget feel, especially in the camera movement, but that’s fine. It actually works in the film’s advantage. And he never goes too gory or explicit in violent and lovemaking scenes respectively. He knows where to draw a line which again is a feat in itself! The film ends on a shocking note and one is sure to wonder what just happened and most importantly, what will happen next.

As expected, Nawazuddin Siddiqui delivers a yet another award winning performance. There’s something so lovable about him despite that he’s playing a ‘Haraamkhor’! He subtly makes a deep impact and that is amazing about him. My best scene of him would be when he is trying to convince his wife to not leave. He just rocks! Shweta Tripathi, who wowed everyone with Masaan, is back with another great performance. In fact, it’s great that Haraamkhor is releasing after Masaan as this film shows Shweta’s worth as an actor in a far better way. This is no easy performance but Shweta makes it seem like a cakewalk. And she’s extremely cute and the manner in which she performs in some scenes is sure to bring a smile on one’s face! The kids, Mohd Samad and Irfan Khan, are bound to be loved the most. They are the scene stealers! Hats off! The kid playing Shaktimaan is also damn good. Trimala Adhikari initially doesn’t make a mark but in the later scenes, she does a great job. The actors playing Sandhya’s father and Neelu also perform very nicely.

Vishal Khurana’s music is subtle and makes an impact. Siddharth Diwan’s cinematography is raw and works well for such kind of a film. In a few scenes however, it could have been a bit better especially in the house sequences. Production design is first-rate and the film has been shot in some great locations. Dialogues are damn good and sharp. Shlok Sharma’s story is superb and it’s praiseworthy that he thought of such a plot in just three days! Screenplay is very effective. It’s amazing how the humour arises in the most unexpected of places and this is bound to leave one amazed and obviously in a guffaw as well! Shlok Sharma’s direction is also great despite all the limitations that he faced. In the beginning portions however, it could have been better. But overall, this is a great job by Shlok!

Some of the best scenes:
1. Sandhya follows her father
2. The kids bring fees
3. Sandhya loses her chappal
4. Mintu and Kamal break into Sandhya’s home
5. Shyam tries to start the ‘Luna’
6. Kamal clicks his picture
7. Sandhya and Shyam go to the town
8. The last 20 minutes

On the whole, Haraamkhor is wicked and twisted but it’s handled very sensitively. And the humour is infused smartly and at places, in the most unexpected of situations, which adds to the fun! Anurag Kashyap’s protégé Shlok Sharma makes a great directorial debut despite the limitations that he must have faced while filming (in just 16 days, that too!). Nawazuddin Siddiqui and Shweta Tripathi rock but it’s the kids who steal the show! Give this small film a chance!