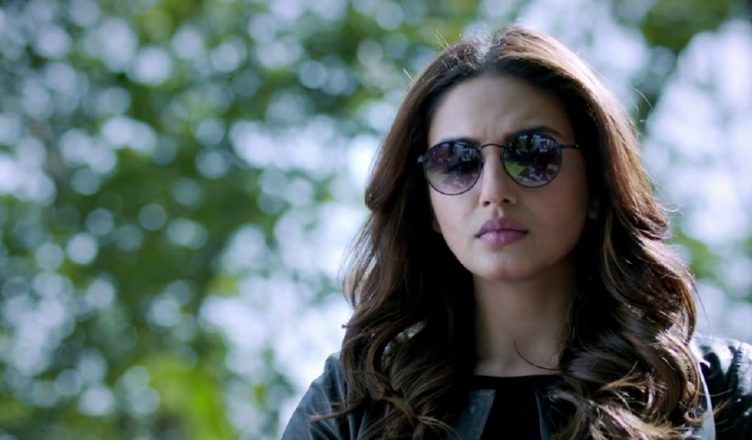 Arguably, there’s not much of novelty that one can now do in horror genre. After countless scarefests, it feels at times that we have seen it all. But once in a while comes a film that challenges this notion. Oculus (2014) was one such film that was a horror movie with a difference. Hence expectations were there for its Hindi remake, Dobaara. That its trailer promised a great ride also added to the excitement. Sadly, Dobaara turns out to be one of the worst horror movies to have come out of Bollywood!

The story of the movie: Kabir (Saqib Saleem) is in a detention centre in UK for killing his father Alex (Adil Hussain) as a child. He’s released and his sister Natasha (Huma Qureshi) appeals to him to help her in exposing to the world the truth that Alex was under the spell of a spirit. The spirit had found its way into their palatial house due to a mirror that has a history of killing its occupants. Kabir at first refuses to believe in Natasha’s theory. But he is soon compelled to change his mind.

Dobaara has a hackneyed beginning. But one lets it pass, hoping that things will get better once the siblings begin their ‘Mission: Expose Ghost’. Shockingly, the entire part where Kabir mocks Natasha for exposing the ghost is stretched needlessly. The ghost makes an appearance only minutes before the intermission, that is almost after an hour. Till then viewers are fed with unnecessary conversations between the siblings. What’s also bewildering is that Oculus was an engaging film from start to finish. It had some great scenes that sent a chill down the spine. Dobaara has just one fourth of those scenes. And they were simplified in Oculus while in Dobaara, these sequences are very complicated.

Performances however are decent. After supporting performances in Badlapur and Jolly LLB 2, Huma Qureshi gets quite a meaty role here and makes great use of it. She fulfills the criteria of playing a heroine who’s spooked and who’s also trying to avenge from the evil spirit. Saqib Saleem also performs well and just like Huma, gets to offer something new to the audience. Watch out for him when he raises his voice against Huma – he’s quite good! Adil Hussain is very good in the evil avatar. His looks and baritone voice further help. Lisa Ray (Liza) is fair. Rysa Saujani (young Natasha) and Abhishek Singh (young Kabir) do a good job. In fact, they have crucial parts in the film. Rhea Chakraborty (Tanya) as always is a pleasure to watch.

Music has no place in the film. Avedis Ohanian and Aditya Trivedi’s background score is horrifying as per the film’s mood. Anuj Rakesh Dhawan’s cinematography is fine. Mike Flanagan and Jeff Howard’s story is terrific without a shred of doubt. But Prawaal Raman’s adaptation is poor and ruins a well-written and etched plot. His screenplay too does nothing to salvage the mess and same goes for direction. Yes, lot of filmmakers, while remaking a hit film, do make changes to suit the taste of the target audience or such other reason. In case of Dobaara, these changes fail miserably. It would have been better if he had instead made a frame-by-frame remake of Oculus.

On the whole, Dobaara is a poor show. It’s an official remake of Oculus but the makers of Dobaara have done some needless and insipid changes in the plot for reasons best known to them The result: Dobaara emerges as one of the worst horror films of Bollywood. Avoid!