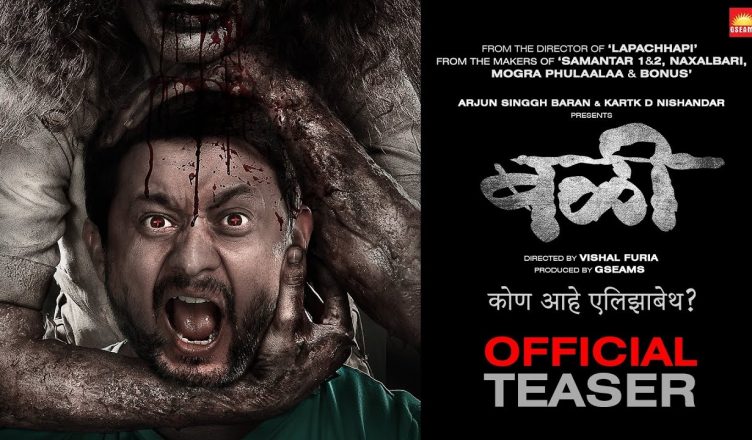 Producers Arjun Singgh Baran and Kartk D Nishandar of GSEAMS (Global Sports Entertainment and Media Solutions Private Limited) have released teaser of their upcoming Marathi film Bali today. All set to be released on April 16, Bali has been directed by Vishal Furia, and features Marathi superstar Swwapnil Joshi in a key role.

The teaser adds to the horror value as a woman is seen calling and hunting for someone in an old structured hospital. Also the tagline ‘Who is Elizabeth?’ is intriguing. In short, the 47 second long teaser manages to create the desired impact

The much talked about horror drama is produced by GSEAMS, the producers of many hit films such as Mogra Phulaalaa, Bonus and the web series Samantar 1 and 2 and Naxalbari. Furia had shot to fame by his hit thriller Lapachhapi, released three years ago.

“We received overwhelming response to our two posters released earlier. The audience has been enquiring about the releases of the film. There could be no alternative to Vishal Furia when it comes to the horror thriller. The icing on the cake is Swwapnil Joshi who is playing the lead role in the film. Thus, every aspect to the film comes with a glory of its own. We can assure that the film will give its audience an unprecedented and different experience,” said Arjun Singgh Baran and Kartk D Nishandar of GSEAMS.

Director Vishal Furia, who shot to fame with his first horror Marathi film Lapachhapi three years ago, said, “I can assure the audience that Bali will be more entertaining than Lapacchapi. The teaser we released is the testimony to this claim. Besides having a high standard of production in every aspect, the actors in the film have given their best for the film. Producers have ensured that they give their best on every front making this film one of the best in Marathi film industry. I am sure that we together could ‘scare’ the audience and make them enjoy it.”