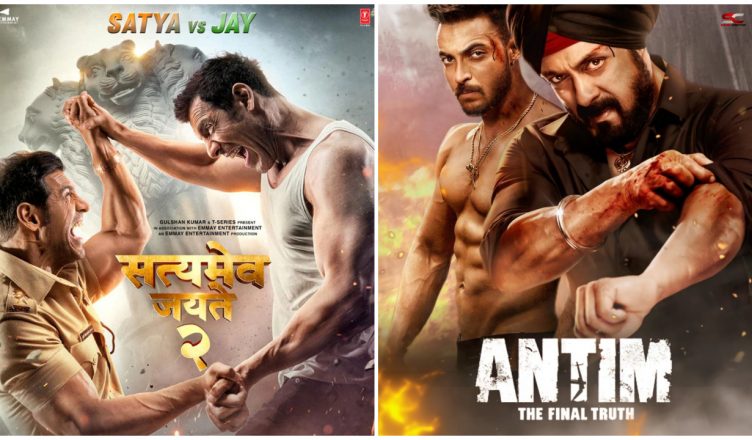 SATYAMEVA JAYATE 2 VS ANTIM THIS WEEKEND!

The first big clash of the season is here. Two massy entertainers are all set to clash this weekend. Interestingly, both won’t release on the same day. While Satyameva Jayate 2 arrives on Thursday, November 25,Antim will be released on Friday, November 26.

Satyameva Jayate 2 is the sequel of the very successful Satyameva Jayate. The first part had a huge opening of around Rs. 19.65 crore, shocking trade and the industry. It later dropped and ended up collecting Rs. 79.61 crore in its lifetime. Yet, the huge opening and the way masses went to see it in hordes motivated the makers to come up with a sequel. Part 1 starred John Abraham and ManojBajpayee. Satyameva Jayate 2, meanwhile, features John in a triple role! Divya Khosla Kumar, makes a comeback as an actor. And like the first part, Nora Fatehi will be seen here in a sizzling item song.

The trailer of the film has received polarized reactions. While some have loved it, others found it unbearable. That’s because the film is treated in a very commercial manner. The film has the potential to open at around Rs. 8-10 crore. Whether or not Satyameva Jayate 2 manages to go beyond the collections of its predecessor will depend on the word of mouth and how the other film turns out to be. Its chances of succeeding in the high end multiplexes are bleak as the audiences thronging such properties look down upon such cinema. Hence, it’ll have to depend on the footfalls from single screens and theatres in Tier-2 and Tier-3 cities.

The other film, Antim, stars Aayush Sharma in a lead role and Salman Khan in a supporting role. It is directed by Mahesh Manjrekar and is the remake of the 2018 acclaimed Marathi film, Mulshi Pattern. There was a lot of negativity surrounding the film, especially after Salman’s last film, Radhe, failed to impress audiences. They feared that Antim would also be yet another substandard product. However, the trailer has surprised many viewers as the film looks like a well-made product. Salman plays the roles of a sardar cop and this time, his character is devoid of any comedy or romance. Yet, the fans have lapped it up.