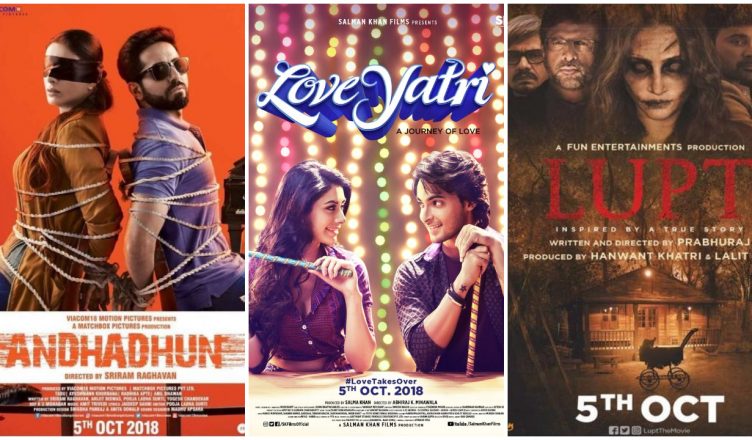 The month of October is here and it’s going to be very crowded. Each week will see at least three releases. Almost all of them are small and medium budget films and they are trying their luck in this month itself since November and December will be dominated by the biggest films of the year. Tomorrow, three films are releasing out of which two of them have a chance. My analysis:

ANDHADHUN: It is directed by Sriram Raghavan, known for crime thrillers like Ek Hasina Thi, Johnny Gaadaar and Badlapur. Starring Ayushmann Khurrana, Radhika Apte, Tabu and yesteryear actor Anil Dhawan, it is the story of a blind piano player who gets involved in a crime. The trailer is highly interesting and has got noticed. Even the songs have made some impact. But it’s the trailer that has done the trick as it makes people intrigued. Ayushmann is the one who plays the blind man but the trailer gives one an indication that he might not be blind. Since it looks like a niche film, the opening won’t be huge and will be in the Rs. 3 crore range. A good word of mouth will ensure the film gets commercial success. It can also sustain well in the weekdays if the response is positive.

LOVEYATRI: It marks the debut of Salman Khan’s brother-in-law Aayush Sharma and Afghanistan beauty Warina Hussain. Directed by debutant Abhiraj Minawala, it is majorly based in the town of Baroda during the nine-day festival of Navratri. The film is also releasing just a few days before the festival with the hope that it might give the film a boost. The trailer seems okay but the songs have worked very well, especially Chogada. The film gives a nice nostalgic vibe of the 90s Hindi films but it also looks too simple. Nevertheless, it has a chance in the single screens and Gujarat, where the film is based. Just like Andhadhun, it’ll also open in the Rs. 3 crore range and it remains to be seen which film comes on top on Day 1.

LUPT: It is a horror flick starring Jaaved Jaaferi Vijay Raaz, Karan Aanand, Meenakshi Dixit, Niki Walia, Rishina Kandhari and Rishab Chadha. The film looks interesting but there’s absolutely no buzz about it. Neither have the songs made a mark. The horror element might help the film some audiences. But day 1 collections would be disastrous and it can be even less than Rs. 30 lakhs