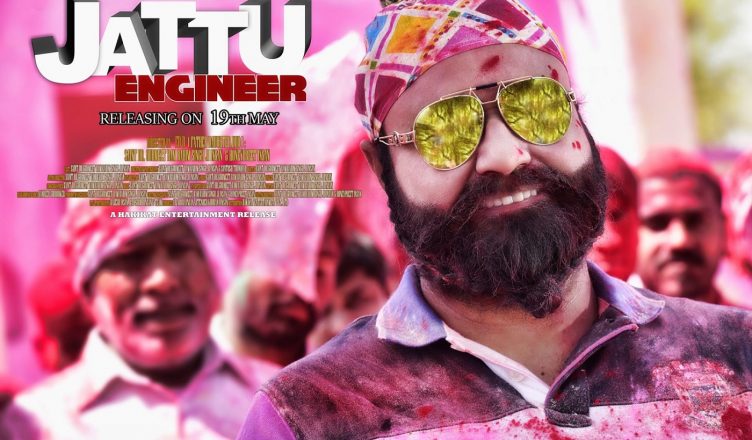 Jattu Engineer, as per the makers, is the first comedy film of Gurmeet Ram Rahim Singh Insan aka Dr Pitaji. As if the other films were not funny enough! And as expected, the film raises some unintentional laughs. The good thing is that it’s better than Dr Pitaji’s previous film MSG Lion Heart – 2: Hind Ka Napak Ko Jawab. In this film, Dr Pitaji plays Shakti Singh Sisodia aka Triple S and he’s appointed as the headmaster in a filthy village named ‘Tattiya Kar’. He manages to make some influence on the kids and to ensure his plan gets successful, he disguises himself as Sghaint Singh Sidhu. Why he does so is bewildering since he is quite impactful as Triple S as well. I can’t believe I am saying this but Dr Pitaji is quite impressive as Sghaint Singh Sidhu! If he preps well, he can easily play a sidekick in an Anees Bazmee or David Dhawan comic caper. His takiya kalam ‘thook laga ke’ is an interesting idea and again, in a better directed and written film, it could have made for a nice watch – remember Shakti Kapoor’s ‘pyaaz kaat ke’ in Har Dil Jo Pyaar Karega? The entry scene music for both Triple S and Sghaint is quite foot-tapping. But the glitches are aplenty. The toilet humour is cringeworthy. The makers cross all lines during the ‘selfie with poop’ sequence – yes, you read it right! A sequence of the film is about women empowerment and is lifted from Dangal. They are noble enough to even use the word ‘dhaakad’ in case you don’t get where they got the idea from! And not just that, there’s a sports scene towards the end followed by national anthem! The usual stupidities are also there – in a shot, Dr Pitaji says ’10 baj gaye’ and few seconds later he claims ‘ab toh 10 baj ke 10 minute ho gaye’. Interstellar effect maybe? Like in his previous films, even here he tries to impress the right wingers. In one sequence, he criticizes a concerned citizen because the said woman was advising villagers not to waste water by celebrating Holi. For the first time, Dr Pitaji wears shorts and exposes his waxed legs but I doubt this is something that would pull people viewers to theatres. Talking about viewers, my whole show was fully booked – I got a seat in the fourth row from the front. But the show was barely 75-80% full. Also, the viewers weren’t whistling or hooting for Dr Pitaji which was a bit of a downer. But I can’t blame them – even they must have got bored of doing it again and again and that too for such trash. An influential viewer, who was managing the crowd, was trying to tempt people outside the theatre to see the film since they had extra tickets. One couple showed interest at first but then backed off and lost a golden opportunity of enlightening themselves about the legend called Dr Pitaji!