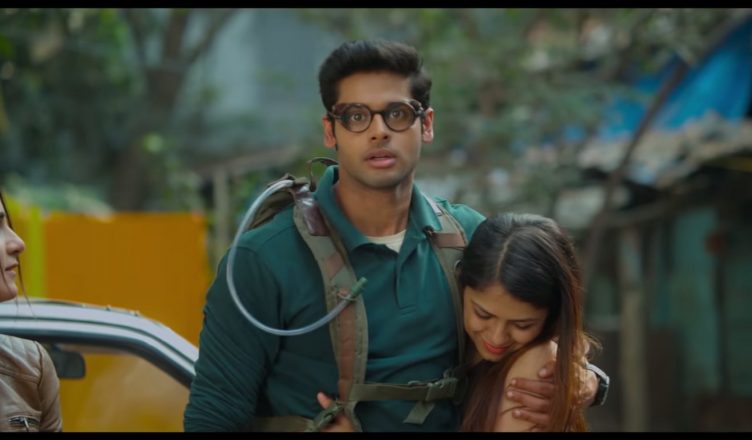 The one genre where Bollywood has lacked as compared to world cinema and Hollywood is black comedy. There’s so much we can do here but not many have taken the effort. Vasan Bala finally takes it upon himself and comes up with Mard Ko Dard Nahi Hota. The result? This comic caper peppered with dark humour and pop culture references turns out to be one of the most unique and enjoyable films in recent times!

The story of the movie: Surya (Abhimanyu Dassani) is born with a rare defect called Congenital insensitivity to pain. In simpler words, he doesn’t feel pain. His mother (Shweta Basu Prasad) passes away in his childhood during a shocking accident. The mother’s father (Mahesh Manjrekar) and Surya’s father (Jimit Trivedi) brought him up. The grandfather is free-minded and has unconventional ways of parenting, which his father disapproves as he fears for the safety of Surya. Surya grows up in a controlled environment in a house from where he can’t go out, except for a day. His one and only idol is Karate Mani (Gulshan Devaiah), the karate expert with just one leg. All is going well until one day, Surya is asked by his father himself to go out for an important engagement and this is when his life takes a drastic turn.

Mard Ko Dard Nahi Hota is unlike any film one has seen in Bollywood. It is in the space of Kick Ass and Deadpool but there’s no way one can call Vasan Bala’s film a copy. Earlier this year, Bhavesh Joshi Superhero had also attempted to do something in this genre, although it was too serious and in my view, heavily flawed. Mard Ko Dard Nahi Hota however is highly entertaining, funny and engaging. The film starts off with a high and the way the flashback portions are depicted are too good. Surya’s childhood portions are too good and one doesn’t mind despite that it’s almost 30 minutes long. The fun continues once he grows up and bumps into the feisty Supri (Radhika Madan). The track of Karate Mani is also very interesting and his scenes provide loads and loads of laughter that bring the house down! The pre-climax fight is well presented and same goes for finale. However, in the second half, the film becomes a bit long and repetitive. Vasan Bala tries his best to make the goings on interesting but falters as the action scenes seem the same after the point. Thankfully, this is a minor glitch in the otherwise terrific fare!

Abhimanyu Dassani makes a fine debut and he’s really good for a first timer. This is a very challenging role and there’s no reference as such, especially in Bollywood. But he manages to come out with flying colours and he’s surely a debutant to watch out for! Radhika Madan, last seen in Pataakha, is a pataakha even here. Her entry is a bit late but once she enters the scene, one can’t help but look only at her. She has a terrific screen presence and if she chooses the right scripts, she surely has a long way to go! Gulshan Devaiah is unbelievable and takes the film to dizzying heights. His comic timing is incredible and with this film, the spotlight is sure to come back on him. This talented actor has not got his due and it’s high time that the industry and moviegoers give him the same respect that they have given to Pankaj Tripathi, Rajkummar Rao etc. Mahesh Manjrekar is very adorable and it’s a pleasure to see him in a Bollywood film after ages. Jimit Trivedi, who recently impressed everyone with 102 Not Out, is also quite good and does contribute to the laughter quotient. Shweta Basu Prasad leaves a mark in a small role. The actors playing the young Surya and Supri are terrific.

Karan Kulkarni’s music is quirky and goes very well with the film’s mood. Same goes Karan Kulkarni’s background music which escalates impact in several scenes! Jay I Patel’s cinematography is flawless and the various crazy scenes are well shot. Ratheesh UK‘s production design is realistic. Prerna Sehgal‘s editing is quite slick and stylish and also helps in making the desired impact. The review would be incomplete without the mention of Eric Jacobus and Anand Shetty‘s action. It is real, raw but not too violent and quite appealing!

Vasan Bala‘s story is very hatke and kudos to him for coming up with this idea of a man not feeling pain at all. Vasan Bala‘s screenplay is a clear winner. The way he has written scenes is seen to be believed and he has ensured that even a simple scene is depicted differently. Vasan Bala‘s dialogues are one of the highpoints. The one-liners are crazy and compliment the goings-on very well. Especially the ones mouthed by Gulshan Devaiah are the best! Vasan Bala‘s direction is quite supreme and one can make out that here’s a man who knows his job well. Technically, he’s also quite literate and gives a great experience to the viewers. As mentioned above, at places, he does falter but that’s completely alright considering what a top notch film he has made overall!

On the whole, Mard Ko Dard Nahi Hota is a paisa-vasool and highly entertaining flick that’ll surely turn out to be one of the surprises of 2019, when it releases in cinemas. It might look niche and a film for the multiplex audiences but it’s very massy and does have a chance in single screens as well. Even the kids are going to love this film and the adventures of this man who feels no pain. Don’t miss!